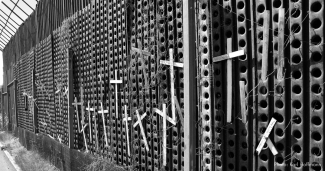 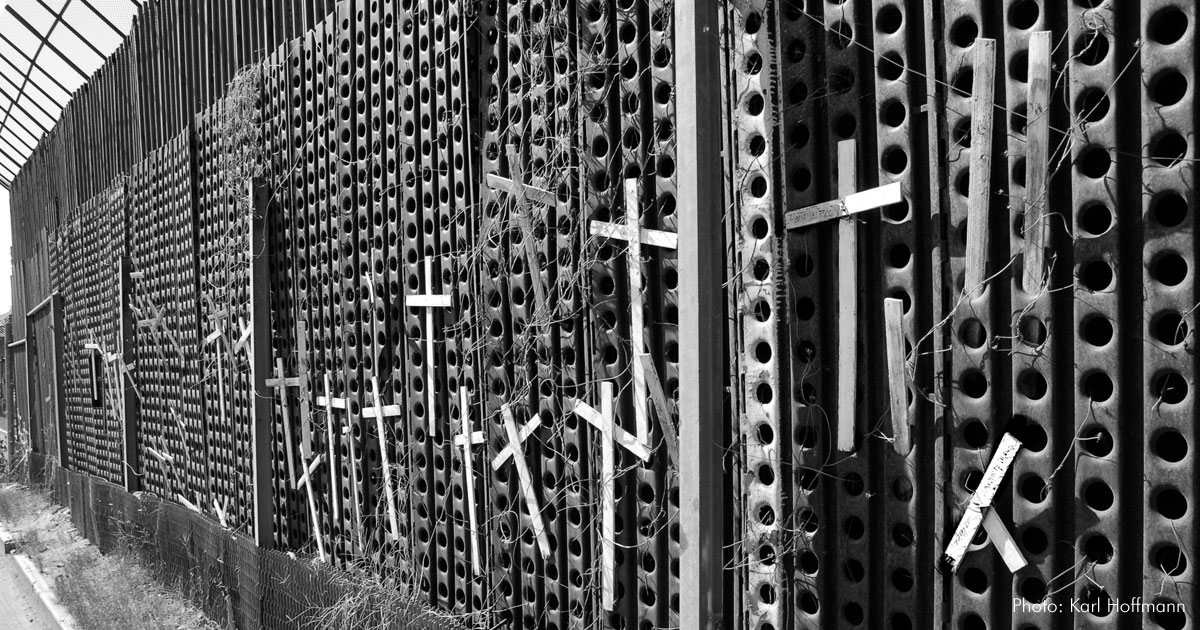 [Editor’s Note: This article is a reprint of a blog post from the North American Congress on Latin America (NACLA), a nonprofit organization with the mission “to provide information and analysis on the region, and on its complex and changing relationship with the United States, as tools for education and advocacy - to foster knowledge beyond borders.” This post comes from their Border Wars column. We at Migrant Clinicians Network believe it is critical to provide a forum for understanding the impact of national policies regarding the US-Mexico border, which have affected and will continue to affect the health and health care access of thousands of migrants and refugees along our southern border. Join the discussion. Let us know what you think, and share this article, on Facebook or Twitter.]

"This election is our last chance to secure the border, stop illegal immigration, and reform our laws to make your life better,” Donald Trump proclaimed in his August 30 “immigration policy” speech. Railing against “the Obama-Clinton open borders policies,” the Republican candidate for the White House pledged that “we will begin working on an impenetrable physical wall on the southern border” on his first day in office. He also promised to hire 5,000 additional Border Patrol agents—a roughly 25 percent increase over current staffing levels.

And yet, hardline US border policing efforts—which have expanded drastically over the past two plus decades and which Trump wishes to drastically escalate even further—have utterly failed to realize their objectives and instead led to the opposite of intended outcomes. A spring 2016 article by immigration scholars Douglas Massey, Jorge Durand and Karen Pren is an antidote to bombast like Trump’s. Massey and Durand have been publishing their findings on the failure of US border immigration enforcement since their landmark 2002 book, Beyond Smoke and Mirrors: Mexican Immigration in an Era of Economic Integration. The 2016 article is their most thorough updating of their work. It should force a fundamental rethinking of US immigration and border control policies. Their work is echoed by many other scholars and activists.

Massey, Durand, and Pren’s study is based on data from one of the largest ongoing migrant databases in the world, and certainly the most comprehensive when it comes to studying Mexican migration. Known as the Mexican Migration project, the database began tracking migration in 1982 and has since interviewed some 151,000 people from migrant-sending households in twenty-four Mexican states. Massey and Durand have been publishing work on this massive project since 1987. In their recent study, the authors take 1986, the year that the Immigration Reform and Control Act was enacted by the Reagan administration, as the starting point for escalated border immigration enforcement efforts, and examine data through 2010, allowing a detailed analysis of decades of long-term immigration trends. During this period, there was enormous growth in resources devoted to boundary enforcement. The US Border Patrol, for example, saw an increase of 850 percent in its budget—reaching $3.8 billion per year in 2010 and a quintupling of the number of agents, to more than 20,000.

The dramatic growth in the border policing apparatus, Massey, Durand, and Pren propose, can be traced back to the mid-1970s. Since then, three connected groups of self-interested social actors—immigration control bureaucrats asking for larger budgets, politicians seeking more votes, and media pundits in search of bigger audiences—have produced a “moral panic” about undocumented immigration from Mexico by playing up images of a “Latino threat.” Trump’s infamous demonization of undocumented Mexican immigrants as rapists and drug dealers is only a more extreme version of the outrageous and grossly misleading statements politicians have been making for decades. Such vilification has fueled much public fear and hostility toward undocumented Latino immigrants, resulting in a self-perpetuating cycle of public support for ever-escalating border enforcement.

Given that calls for such policies are based on outright falsehoods, according to the study, it’s little surprise they’ve been completely ineffective. The idea of increasing border enforcement and even building a wall ignores some of the key dynamics that historically underlie Mexican migration to the United States: a growing population and falling wages in Mexico, coupled with ongoing labor demand in the United States, whose dynamics have shifted significantly in recent years.

Such shifts help illuminate one of Massey, Durand, and Pren’s most striking findings: the huge increase in border enforcement spending had virtually no impact on the likelihood that a potential Mexican migrant would undertake a border crossing without documents for the first time. That is, immigration enforcement is not a deterring factor for this group. Though the number of migrants fluctuated from 1970 through 1999 (linked to trends in US labor demand and Mexican wages), there was a clear drop-off after 1999 (through 2010) in first-time undocumented migrations. However, the researchers found this was not statistically related to increased border enforcement. Instead, it was tied to a dramatic reduction in the Mexican birth rate in prior decades, which resulted in fewer young workers in need of jobs; the prior out-migration of masses of young people, which left fewer individuals trying to migrate for a first time; and crucially, increased access to legal visas after 2005. They also cite a somewhat improved Mexican economy and social conditions. Projecting into the future, the authors predict that the era of mass migration from Mexico is probably over. However, the more than 500,000 Mexicans who have come to the US with temporary worker visas per year suggest that is not certain.

Similarly confounding for policy makers, Massey and colleagues found that the massive increase in border enforcement spending had virtually no effect on the successful entry (after multiple attempts) of undocumented Mexican migrants from 1986 through 2008. (Each year they found a 95 to 100 percent success rate for entry.) The eventual successful entry rate did drop to 75 percent in 2010, but this was among a much smaller pool of unauthorized crossers by that time. That said, the border build-up did have a host of negative consequences for migrants, many of which have impacted border communities. One of the most obvious was that it pushed unauthorized crossings out of urban areas, like San Diego and El Paso, where the vast majority of such crossings had long taken place, to non-traditional, rural crossing areas that are much more dangerous, particularly the Sonoran desert of Southern Arizona. In response, unauthorized migrants almost universally turned to using coyotes (smugglers) (up to 100 percent usage from 70 percent previously) and the cost of such guides increased by a factor of five (from $550 USD in 1989 to $2,700 USD in 2010), according to the study.

The dramatic increase in deaths of unauthorized border crossers is the most extreme example of tragedies that have resulted from the border build-up. Fatalities more than doubled from an approximate range of 75-150 deaths per year prior to 1995 to 300-500 annual deaths between 2000-2010. There were 477 recovered sets of remains in 2012, despite many fewer total crossers than in the years before the build-up. Overall, more than 7,500 bodies or sets of remains were recovered in the US-Mexico border region from 1994 through 2015.

Although the drastic rise in migrant deaths should hardly be surprising given the strategic goal of pushing crossers into arduous terrain, it appears to have caught US officials off-guard. In 2000, then Immigration and Naturalization Service (parent agency of the Border Patrol at that time) commissioner Doris Meissner explained in an interview with The Arizona Republic, “We did believe that geography would be an ally to us ... It was our sense that the number of people crossing the border through Arizona would go down to a trickle, once people realized what it’s like.” Despite the admission of faulty assumptions and intention of using border policy as a deterring factor, the strategy has remained steadfastly in place and has expanded since. And there has been no accountability for this human tragedy among border patrol, other immigration bureaucracy leaders or policymakers, but rather only braying calls for more border enforcement.

Meanwhile, it was not increased migration but rather perceived difficulties of being able to cross again that led those who made it across to stay longer, resulting in a huge leap in the US undocumented immigrant population from approximately three million in 1992 to 11 million in 2010, half of whom are Mexican. Massey, Durand, and Pren found the rates of return migration within a year for first-time Mexican migrants fluctuated between 30 and 50 percent from 1970 to 1999, but dropped drastically after 2000, reaching zero by 2010. The more fortified border did not keep people out but rather kept unauthorized migrants “caged in” once here, thus interrupting the traditional pattern of back-and-forth migration that existed throughout most of the twentieth century.

Massey, Durand, and Pren argue that a more realistic policy option would be to accept that more open migration— or some degree of free movement of labor— is a “natural component” of the North American Free Trade Agreement (NAFTA). Migration could be better managed, they contend, via a more open border and increased investments in social infrastructure in Mexico (public health, education, transportation, credit access) to increase prosperity for more people. This was the model the European Union successfully followed in Spain and Portugal during the 1980s and 1990s, transforming those countries from migrant-sending to migrant-receiving countries. Fixing the legal status of the 11 million undocumented immigrant residents of the United States is the remaining policy issue for the research team.

Today, the US-Mexico border is “secured,” as undocumented immigration from Mexico has dropped sharply, and Border Patrol apprehensions are down 60 to 70 percent since 2007. And as Todd Miller recently pointed out, the “border wall” called for by Trump is already largely built in various forms. Meanwhile, there has quietly been a remarkable increase in worker visa access—some 360,000 temporary worker visas were granted to Mexicans in 2008 (reaching more than 500,000 per year from 2010-2013, up from 27,000 in 1995). Thus, the key remaining part of “immigration reform” yet to be addressed, and so urgently needed, is the legalization of the undocumented immigrant residents—something the polls show the vast majority of the public has supported from 2006 through the present. Amazingly, recent data suggests that even a strong majority of Republicans support the idea. For such reasons, Massey, Durand, and Pren maintain, “More border enforcement and a denial of social and economic rights to those currently out of status makes absolutely no sense in practical or moral terms.”

While the authors limit their analysis to Mexico, their prescriptions are useful for thinking more expansively so as to include Central America and the Caribbean. Together with Mexico, these regions are the sources of three-quarters of undocumented migrants in the United States. What they also share is that United States has played a large role—from disastrous neoliberal trade policies to “security assistance” programs, the war on drugs, and support for anti-democratic regimes—in producing the conditions for high rates of emigration. A more just foreign policy, coupled with more liberal immigration (legalization plus greater visa access) and scaled back border policies, would save billions of dollars wasted on border and immigrant policing. The United States would be much better served to instead use those billions to promote the well being of people abroad and at home.

Timothy Dunn is a professor of sociology at Salisbury University in Maryland. His most recent book is Blockading the Border and Human Rights: The El Paso Operation that Remade Immigration Enforcement (University of Texas Press, 2010).