Funded by the U.S. Centers for Disease Control and Prevention, this project is aimed at the primary prevention of sexual and intimate partner violence (SV/IPV) in the migrant community. 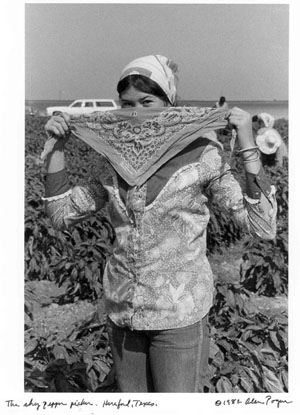 As part of this project, MCN conducted surveys in five migrant communities around the United States in the summer of 2006 to collect baseline data on Knowledge, Attitudes, Beliefs and Behaviors (KABB) related to the prevention of sexual and intimate partner violence. MCN is currently implementing a curriculum in which promotores conduct participatory educational sessions with migrant men to prevent these types of violence in their community. For more information on this project, visit the Hombres Unidos webpage.

The Familias con Voz project began in 2001 and works to educate the migrant and recent immigrant population along the U.S.-Mexico border about the realities of domestic violence and the resources available in their communities to prevent and confront this problem. This peer-led community education project is geared specifically at Hispanic/Latino migrants and recent immigrants in Eagle Pass and Presidio, Texas. Titled Familias con Voz (Families with a Voice) by its participants, the project began with the efforts of female Family Violence Advocates to lead family violence prevention education groups and progressed to include males and teenagers as Family Violence Advocates working to raise awareness about domestic violence. For more information visit the Familias con Voz webpage.

In 1994, MCN began the Practice Based Research Network on Domestic Violence and Migrant Farmworkers (PBRN), a project aimed at both increasing the capacity of primary care providers to participate in research that would impact care practices and documenting the incidence of domestic violence in the migrant farmworker population.

Over 150 nurses, doctors, nurse practitioners, and outreach workers participated in the PBRN, gathering incidence data on 1001 women using the MCN Domestic Violence Assessment Form. Ninety-one percent of respondents were Hispanic and approximately 20% of the women surveyed reported experiencing either physical or sexual abuse within a year of being interviewed. Drug and alcohol abuse was significantly correlated with fear of partner and physical and sexual abuse.

In 1996, MCN formed a partnership with Lideres Campesinas, a self-organized group of farmworker women, and the Family and Intimate Violence Prevention Team of the Centers for Disease Control and Prevention (CDC). Twenty-seven farmworker women participated as Domestic Violence Specialists, providing referrals to migrant women experiencing abuse. The outcome of this project included a formal curriculum for domestic violence training in the farmworker population. In addition, the collaboration resulted in the creation of a domestic violence print and audio campaign including public service announcements, an educational video, five color posters, and a fotonovela. All products in the print and audio project are bilingual.

From 1995-1998, MCN and the State of Wisconsin collaborated on a project aimed at developing migrant-specific, grass-roots strategies for domestic violence intervention programs directed toward migrant farmworker men. Four focus groups were conducted to address domestic violence from a male farmworker's perspective. The results of these focus groups include reports on the differences between women's and men's perspectives and a draft intervention strategy for working with farmworker men.

Funded by the U.S. Department of Justice, Violence Against Women Grant Office, in 1997, MCN and Ayuda (a Washington DC based advocacy group) conducted a project to address the implementation of VAWA in the migrant community (specifically the issue of protective orders when individuals are crossing state lines). Two focus groups were brought together - one consisted of migrant farmworker women, the other of service providers - to address this issue.

In 1998, MCN began a three-year research initiative funded by the Centers for Disease Control and Prevention, Family and Intimate Violence Prevention Team. The project was entitled No hay mal que por bien no venga (Every Cloud has a Silver Lining). MCN provided training workshops on domestic violence issues to over seventy migrant farmworker women in three Texas communities along the U.S./Mexico border. Women, who were self-selected from the workshops, surveyed other migrant farmworker women on the occurrence of physical or sexual abuse in the last year. In a two-year period, twenty-one migrant farmworker women (advocates) successfully surveyed 1,913 of their peers. The survey instrument used by the advocate was an ICON form modeled after the evaluation for Physical Abuse Form developed by Judith McFarlane, Texas Women?s University. The results of the survey indicated that 53% of the migrant women interviewed reported experiencing abuse in the year prior to the survey. The percentage of women who reported experiencing domestic violence was more than double that encountered by the PBRN. It was hypothesized that the increased reports of violence were a factor of different survey methods. An important outcome of the project was the expansion of the advocates' leadership roles as they provided domestic violence information and resource referral to migrant women in need.

Funded through a grant from the United States Department of Justice, Office for Victims of Crime, the MCN program "Clinical Network in Action" was created to improve services provided by healthcare professionals to migrant and seasonal farmworkers. In 2000, MCN facilitated eight regional domestic violence trainings and one national training on domestic violence issues for migrant health professionals. Over 128 clinicians were trained by MCN in six different states on screening and documentation for domestic violence. In addition, MCN created a migrant-specific training manual for health care providers entitled: Addressing Domestic Violence in a Clinical Setting.

Trainings for Migrant Workers and Clinicians

MCN provided trainings to 238 community members and 51 clinicians through trainings throughout Texas as part of a grant from the Texas Department of Human Services, Family Violence Program. These trainings took place between 1999 and 2001.

Funded by the United States Department of Health and Human Services, Agency for Children and Families, Office of Community Services from 2002-2004, this project represented a collaboration between MCN and Defensa de Mujeres/ Women's Crisis Support, a women's shelter in Watsonville, California. In the first phase of this project, MCN created a community survey on attitudes and beliefs about family violence, which was then used by Family Violence Advocates to survey 298 male and female farmworkers in three Texas counties. The community survey yielded descriptive data about what types of violence people witnessed in their communities, where they turned for help, and the differences in perceptions about violence held by men and women. The second phase of this project used the data collected in the community survey to inform decisions about how to conduct an effective violence prevention program in the same communities. In this phase, MCN staff adapted the Defensa de Mujeres curriculum "Healthy Families/Familias Saludables" to the special needs of migrant workers, and hosted a training session for advocates and local service providers on implementation of the curriculum. Prepared with this training advocates led workshops in Texas and Ohio that educated their peers on preventing domestic violence and teen dating violence, preventing alcohol and drug abuse and promoting family well being.