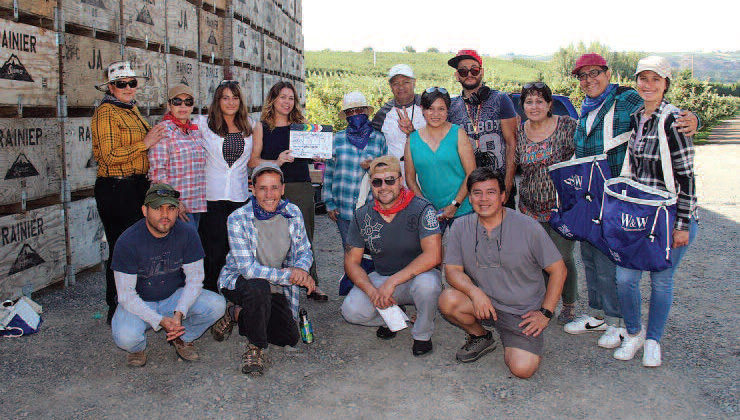 When the #MeToo movement exploded into the national dialogue two years ago, Victoria Breckwich Vásquez, DrPH, MPH, Chair of the Washington Coalition to Eliminate Farmworker Sexual Harassment, feared that the movement was leaving out low-wage workers. “We felt something more was needed: specific conversations around farmworker health and safety in the workplace,” she said. “Despite nationwide efforts and lots of publicity and media, there is ongoing violence towards farmworker women and men that was going unrecognized and not talked about.”

Four years prior, Dr. Breckwich Vásquez had started labeling sexual harassment as an occupational health issue. Dr. Breckwich Vásquez was then working at the Pacific Northwest Agricultural Safety & Health Center (PNASH) at the University of Washington (UW), and as part of Yakima-based El Proyecto Bienestar, a collaboration between UW, Radio KDNA/NCEC, Yakima Valley Farmworkers Clinic and Heritage University. There, she conducted trainings with agricultural worker women on pesticides and other workplace hazards. A few agricultural worker women and a PNASH field staff person approached her to ask if she considered sexual harassment a health and safety issue, since that was on everyone’s minds, “and I stood there, without answers,” she admitted. “We proceeded to do our research, and no agricultural centers were addressing sexual harassment as an occupational health issue.

“Mostly, it’s seen as a legal issue -- that an agricultural worker should file a complaint and get a lawyer,” she continued. “But it’s preventable, and so we focused on that: on prevention at the worksite… Going to work exposed [agricultural workers] to huge risks of being assaulted sexually.” As the #MeToo movement broke, she and her colleagues pushed for attention on the rampant sexual harassment that primarily agricultural worker women, gender nonconforming workers, and some agricultural men, had complained about for decades -- and advocated for prevention strategies.

One of the early projects that El Proyecto Bienestar worked on was to write a script for a radionovela that agricultural worker women developed from their own experiences. Later, that script and another developed for a popular theater project with the state’s Department of Agriculture were the basis for a video script. Together with a companion curriculum, this would be used to train supervisors, growers, and agricultural workers on sexual harassment. She recalled a conversation with a grower who sat on a grower advisory committee. He told her, “What I need, and my members need, is a tool for training. We can talk and talk about this being a thing they shouldn’t do, but we don’t have a way to reach them in their language, we have no tools available. We have some lawyers giving presentations, but it’s not interesting or engaging -- what can we do to get a video?” A subcommittee formed and began work on a video, building a script based on true stories that committee members shared (as agricultural women have been a part of every process), and developing a curriculum around the script.

The video’s audience is wide: “The supervisors were frequently the perpetrators. Growers were ultimately responsible for worker health and safety and held legally responsible. Farmworkers were suffering from the inaction,” so the video is geared for all three, Dr. Breckwich Vásquez explained.

As the #MeToo movement continued to peel back the rampant harassment that women face, growers -- who just a few years before were reluctant to support her work -- were now supporting the video efforts as donors. PNASH, Equitable Food Initiative and a UW Royalty Research grant, with Dr. Jody Early as principal investigator, were key as early funders. Individual and organizational donations by state agencies, growers and supportive organizations buoyed the two-year-long process. The Washington Coalition to Eliminate Farmworker Sexual Harassment grew out of that work. Bringing together people with backgrounds in agricultural work, academics, policy, and advocacy, the coalition began to meet regularly to discuss and coordinate the diverse efforts around the state to eliminate sexual harassment in the agricultural industry.

In the summer of 2019, after the script got feedback from agricultural workers, community members, and attorneys, the coalition contracted with Latino Northwest Communications to do the filming. “They recruited great actors, and worked with us on the script on the set,” she said. The film wrapped up and was released in late November.

“A fifteen-minute video isn’t going to change behavior,” Dr. Breckwich Vásquez admitted. “We built a training that used the video as a tool, to have these kinds of discussions in the workplace.” The video is now available for free, and the companion curriculum is available for the cost of shipping and handling.

The main character, Juana, is named after Dr. Breckwich Vásquez’s mother, who moved from Peru to escape a difficult family life, to work as a nurse in Los Angeles. Dr. Breckwich Vásquez recognizes her mother’s own fierce motivation and unending energy in the agricultural women she works with who generously shared their own difficult stories in hopes of making change. “[Juana, the main character, shows] amazing vulnerability during certain parts of the video, but she knows her work, her value, and she speaks justice and she keeps going, she doesn’t turn back,” Dr. Breckwich Vásquez said. “So many farmworker women have that same sense of justice -- they just want others to not experience what they went through.”

Access the video and order the curriculum at: https://deohs.washington.edu/pnash/toolkit

Read more about PNASH’s work on prevention of sexual harassment in agriculture: https://deohs.washington.edu/pnash/sexual-harassment

Connect with the Washington Coalition to Eliminate Farmworker Sexual Harassment on Facebook: https://www.facebook.com/WCEFSH/

The Power and Control Wheel for immigrant women, in English and Spanish, is a great resource for use in the exam room, from Futures Without Violence: https://www.futureswithoutviolence.org/power-and-control-tactics-used-against-immigrant-women/

Casa de Esperanza is a nonprofit national resource center focused on sexual violence with culturally appropriate and engaging resources in English and Spanish. Health centers can present Spanish-language signage to encourage those suffering from abuse to get help; Casa de Esperanza offers a 24/7 bilingual hotline for those needing assistance: 651-772-1611. https://casadeesperanza.org/es/
Health Network and PRAPARE
In 2016, just as PRAPARE was set to launch, Migrant Clinicians Network was beginning to develop its new database to better serve patients enrolled in Health Network, MCN’s bridge case management program. Over the course of the following year, MCN configured the new database to allow for the integration of PRAPARE data, in which one health center’s PRAPARE data can be transferred to the next health center, as a mobile patient moves.
“When we started thinking about that data and [Health Network] case management work, so much of case management isn’t just ‘are you taking your medication every day?’ It’s more about, ‘How can I help you access care and manage your health in general?’” explained Anna Gard, RN, who assisted MCN in the development of the new database. “One piece of this is: ‘Let me help you find a health center.’ But the larger pieces around effective case management are, ‘How are you going to get there? Is there public transportation? How are you going to pick up your medications if you live in a hostile community and you’re afraid of leaving the house?’ PRAPARE gives a structured format to capture [these] data, in a form that’s been tested and validated.”
As more health centers provide case management and chronic care management to address the social determinants of health, Gard noted, integration of the PRAPARE data with Health Network, a virtual case management, seemed to make sense. Now, the Health Network team is working to fit PRAPARE into their own workflow.
Saul Delgado, Health Network Data Specialist, who has been integral in building and launching Health Network’s new case management system, notes that asking such personal questions over the phone, when a patient doesn’t have transferrable PRAPARE data from a previous health center, can be challenging. “When we call, the patient doesn’t know you. They’re very scared to answer these kinds of personal questions, whereas when you go the clinic, you at least see the nurse or case worker face-to-face,” he explained. But he recognizes the utility of the data, and has developed the PRAPARE data screens within the database to be easily accessed from the main patient information screen. With drop-down menus, Health Network Associates can populate the information they hear from patients, like how many people live with them in their household, or if they’re worried about losing their home. The information, either attained from a previous health center or inputted by a Health Network Associate, will be transferred when the mobile patient gets to his or her next destination, just as the basic medical records do.
“Health centers are doing more to integrate social and behavioral determinants of health, and we’re recognizing that all of those things have to be integrated with care management. So we’re on the forefront,” Gard concluded. 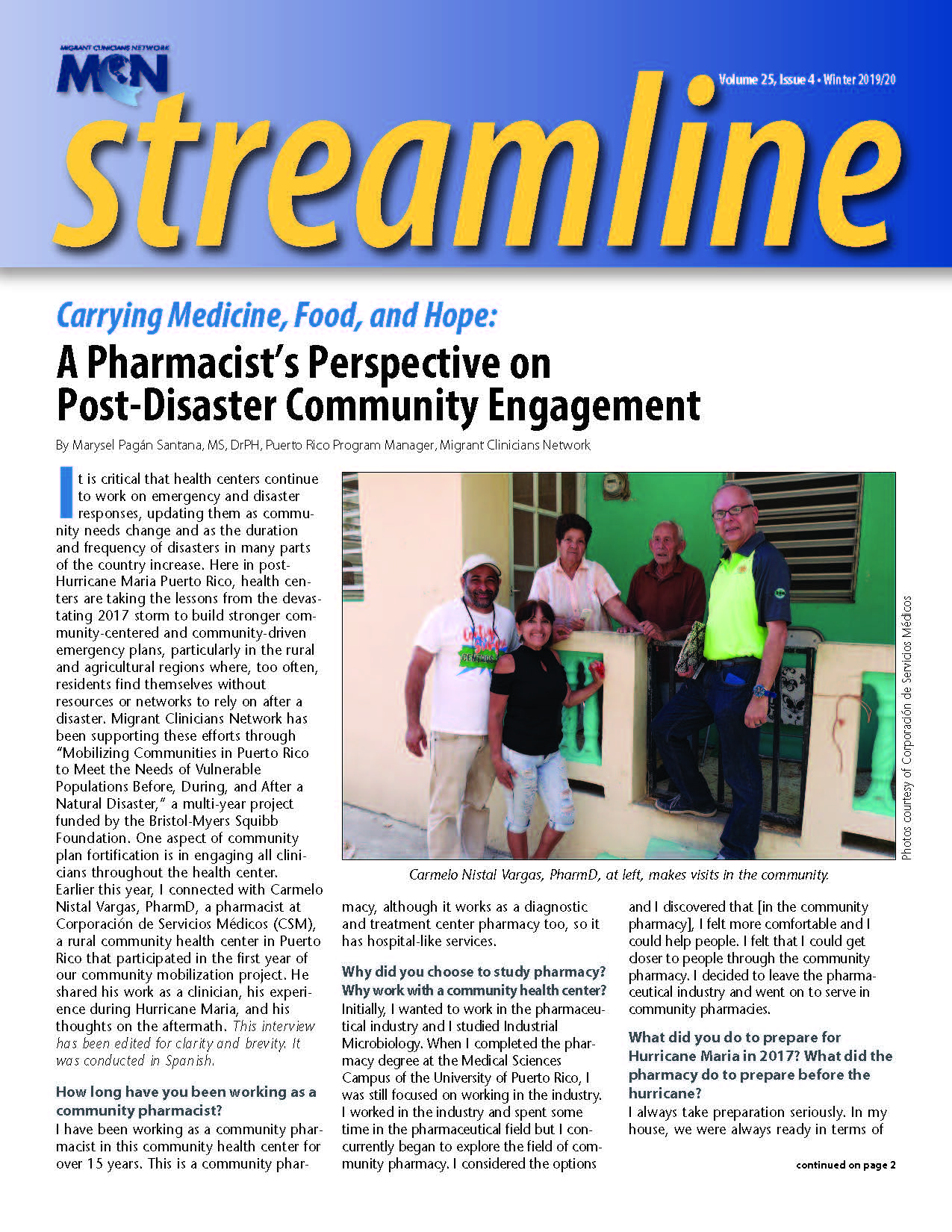 Read this article in the Winter 2020 issue of Streamline here!