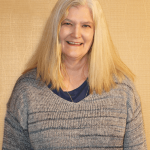 The two-hour training in oral health was held in Prescott, a remote rural city of Washington State, in August, 2015. It was conducted entirely in Spanish, among a hard-to-reach population of farmworkers. The principal goals of the training were to: 1) determine the process for developing a community health worker oral health education program; 2) identify the most commonly reported barriers to dental care access and the greatest dental needs among Latino families in Washington State; and, 3) identify methods to integrate oral health messages into outreach efforts for underserved communities.

All 19 participants were born outside of the US, mostly in Mexico. The ages of the 16 females and three males ranged from 25 to 65 years old. Although they all worked in agriculture, they had different occupations in production packing, farmwork, cooking, and administration. All participants spoke Spanish and 32 percent identified themselves as bilingual in English and Spanish.

The training consisted of two phases. The first phase developed the content of the training, and the second phase evaluated and disseminated the training. The content of the training included general information about taking care of oral health, identifying dental resources in the area, and identifying social, cultural, economic, structural, and geographic factors affecting oral health. The results of the pre- and post- surveys, which are featured below, were conducted in English and Spanish as part of the second phase.

The pre-training survey demonstrated that 90 percent of surveyed participants did not visit a dentist on a regular basis, while 58 percent of them thought that a regular visit to a general doctor is enough to maintain oral health. Twenty-one percent believed extraction of a tooth to address a cavity was a preferred alternative over the more expensive filling of the tooth. In discussion with the group, we discovered that multiple participants had extracted teeth at home, without the supervision of a dentist. Because of that discovery, future surveys will include a specific question on self-extraction of teeth.

Only 16 percent were previously trained in oral health; nine percent did not know that oral health can affect other health conditions. Six percent did not believe that fluoride is necessary for oral health and five percent believed a consultation with a neighbor is enough to take care of a dental infection.

After the training, surveyed participants' assessments indicated that on average 100 percent had absorbed the target knowledge relating to: 1) cavities;  2) bacteria as the cause for an abscessed tooth; 3) tooth decay; and, 4) identification of complications associated with dry mouth. All participants post-training also correctly indicated that oral infection can be a serious problem that needs immediate medical attention. All participants were able to identify at least one social, cultural, economic, structural, or geographic factor that could be a barrier to obtaining oral health including the shortage of dentists in the Pacific Northwest region, and hygienists in the local area; living in a remote and/or rural area; low socioeconomic status; high cost of dental services; stress; transportation; lack of time; limited knowledge of basic steps to take care of oral health; and fear of going to the dentist.

Nearly all survey participants reported that they were very likely to use their newly acquired knowledge for themselves, their families, and their communities on a daily basis. This training seems to have met the expectations regarding the level of satisfaction of participants. One hundred percent agreed in the survey that the training was very educational and productive. Participants also indicated that the instructor was very professional and well-qualified to conduct the training.