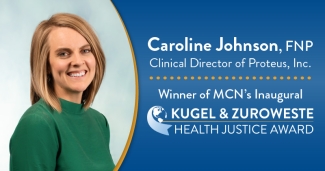 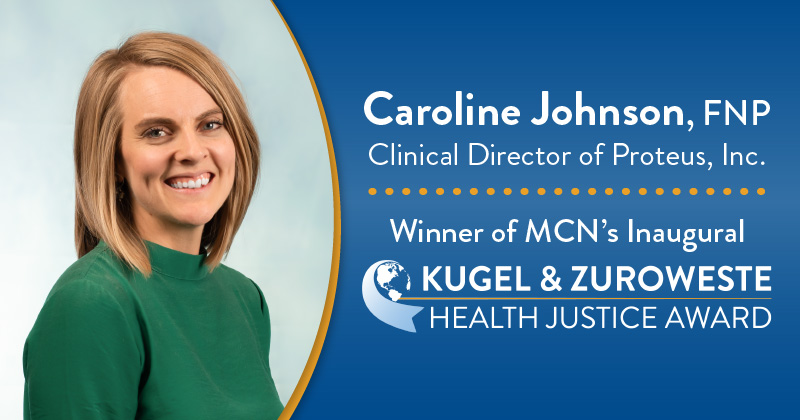 In a year where the news has often ranged from difficult to grim, it is particularly important to celebrate the positive when it can be found, especially as it pertains to leadership. While the pandemic continues to grip the country, it has also offered the opportunity to recognize the heroes working to make a difference directly on the frontline. One such hero on the frontline making a difference with her leadership skills is Caroline Johnson, FNP-BC, who has been chosen as the recipient of Migrant Clinicians Network’s inaugural Kugel & Zuroweste Health Justice Award.

Named after MCN’s own Candace Kugel, FNP, CNM, MS and Founding Medical Director Ed Zuroweste, MD, the Kugel & Zuroweste Health Justice Award recognizes the frontline clinicians who are making an impact at the intersections of health and vulnerability within migrant and mobile populations, with the caveat that the individual must still early in their career and without any other national recognition or award to speak of.

The ideal candidate was described as ‘a rising star,’ a designation that fits Johnson, according to Dr. Zuroweste.

“When you look at what she accomplished, she was just such a stand-out choice [with] her leadership skills, especially,” Dr. Zuroweste said.

Johnson is the clinical director of Proteus, Inc., an organization which provides advocacy, health, and support services to agricultural workers throughout the Upper Midwest. A graduate of Vanderbilt University, Johnson has served as the Clinical Director at Proteus, Inc., since 2019, meaning she was still new to the role when COVID-19 achieved the status of pandemic. Yet this challenge did not deter her, according to Daniel Hoffman-Zinnel, Proteus, Inc.’s Chief Executive Officer, who co-authored her nomination. Rather, it motivated her to rise to the occasion and confront the work head on.

“It’s not an exaggeration to say she saved lives, a lot of lives,” Hoffman-Zinnel said. “That needs to be emphasized.”

According to their nomination essay, Johnson’s critical leadership skills were crucial to effecting change. Reaching out to Iowa-based leadership, Johnson put a plan into place that minimized the COVID-19 risk. Her strategy focused on isolation and testing, beginning with coordinating farmworkers traveling into Iowa via a three-day bus ride from Mexico, by placing them into commuter pods, providing testing upon arrival, and helping them quarantine in assigned hotel rooms until the results were available. Workers who tested negative were then permitted to move into assigned cohorts for the duration of the harvest season, while workers who were positive for the virus were provided isolation housing and treated.

This impressive display of initiative, compassion, and leadership did not go unnoticed. In the months following Johnson’s initial efforts, the Centers for Disease Control and Prevention has reached out to Proteus, Inc.’s leadership, requesting a best practices to be documented in the hopes of encouraging other health care providers across the country to follow suit.

Johnson’s incredible feat also prompted her colleagues to take note, mutually agreeing that she deserved to be nominated for the Kugel & Zuroweste Health Justice Award due to her performance during the height of the pandemic.

“Through the past six months since the pandemic became part of our reality, Caroline has made herself completely available – to patients, to her health team members, to farmers, to employers,” the application explains. “Caroline is the kind of leader who operates in the affirmative – she knows how to say, ‘Yes, we can do that’ and [then] make things happen.”

Johnson’s award will also include a $1000 check, a commemorative plaque acknowledging her win, and a framed print by legendary photojournalist Alan Pogue, whose black and white still documentary images often depict migrant farmworkers not unlike the clientele Johnson works so hard to advocate for.

MCN will also celebrate Johnson’s win with a virtual awards ceremony on Dec. 1, beginning at 10 a.m. Pacific Standard Time. The schedule includes recorded speeches to be given by a who’s who of Johnson colleagues and friends, including Hoffman-Zinnel, Naaktgeboren Trygstad and Claudia Corwin, MD. Kugel, Dr. Zuroweste, and Karen Mountain, RN, MBA, MSN, Chief Executive Officer, will speak for MCN. Laszlo Madaras, MD, MPH, MCN’s Chief Medical Officer, will serve as the Master of Ceremonies. The ceremony will be hosted via Zoom and interested participants are required to register in order to attend.