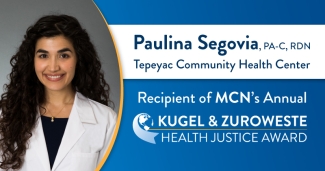 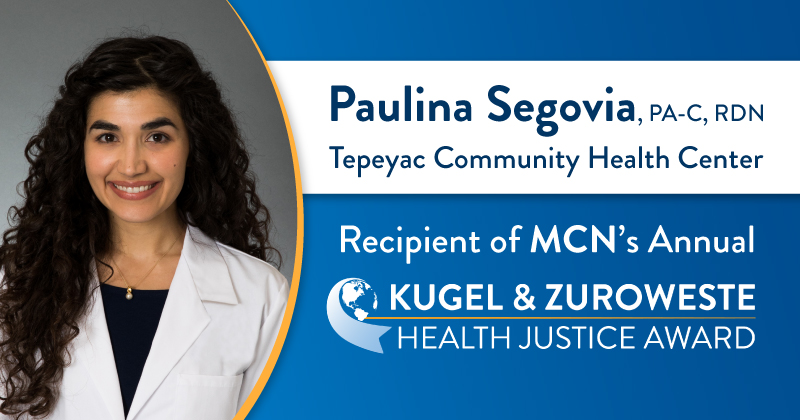 Paulina Segovia, PA, RDN, is only in her second year as a physician’s assistant at Tepeyac Community Health Center in Denver, CO – but she is already making a significant impact on her community. During her clinical rotation, Segovia “never failed to take an extra moment with a patient or learn the socioeconomic barriers a patient was facing,” according to Pamela Valenza, MD, Chief Health Officer at Tepeyac. After her rotation, Tepeyac hired Segovia on, and she has since shown a strong commitment and passion to serve the Latinx community. “She is steadfast, committed, full of integrity, and dedicated to making lasting systems change... I have no doubt that Paulina’s dedication to working in the underserved community will set her on a leadership path and spark a light for others.”

For these attributes and many more, Segovia will be awarded the second annual Kugel & Zuroweste Health Justice Award, in a virtual ceremony hosted by Migrant Clinicians Network (MCN) on April 19th, 2022. The Kugel Zuroweste Award, established in 2020, is an annual award with a prize of $1000 that recognizes frontline clinicians making an impact at the intersection of health and vulnerability within migrant communities.

“She is the perfect example of who we want to recognize as a new clinician leader for the population we all are trying to serve," concluded Ed Zuroweste, MD, Founding Medical Officer of MCN, and half of the duo named in the Kugel Zuroweste Health Justice Award.

Candace Kugel, Clinical Systems & Women’s Health Specialist for MCN, agreed that their eponymous award should go to Segovia, adding, “Her background demonstrates not only clinical excellence, but a dedication and an understanding of the population we all strive to serve. The person who nominated her, her preceptor, described a variety of activities that Paulina was involved in that go above and beyond the typical role of a clinician. That was another thing that attracted us to her.”

Kugel’s words underscore the impressive ability Segovia possesses to connect with her patients beyond simply speaking the same language. Much like the community she serves, her life has been rooted in migration. Segovia’s grandparents, who resided in Italy prior to World War Two, immigrated to Mexico to escape persecution by dictator Benito Mussolini’s fascist regime. Then, her own parents chose to immigrate to the United States before Paulina was born, although they also lived in Brazil for a time. As a result of this geographic diversity, Segovia spent much of her youth traveling the world, visiting the lands of her ancestors at least twice a year. She credits these experiences with stoking another passion: advocacy for the underserved.

“As a first-generation American born to immigrant parents, it is so important to me to advocate for immigrants and for individuals that need access to healthcare,” Segovia recalled. “Even within my own family, my grandmother was one of the first women to graduate from medical school in Mexico."

Segovia’s educational journey began with nutrition. She attended Purdue University, graduating in 2015 with a Bachelors degree in Nutrition Science and Dietetics with a dual minor in Chemistry and Biology. Following the completion of her coursework, the University of Kentucky admitted her as a Dietetic Intern, where she worked closely with veterans and other members of the Lexington community. As much as she enjoyed her internship, particularly the rapport with her patients, she felt an increasing need to change her focus.

“After my work as a dietician, I found my passion began to grow for the underserved,” she explained. “I found that I was, often times, translating or eager to participate of the care of individuals who spoke Spanish or Portuguese, and trying to close the barrier for patients.”

Such efforts went beyond the scope of Segovia’s profession, yet she continued to take on the responsibilities of championing for her patients beyond their dietary needs. After completing her internship, she began working as a dietician at the hospital adjacent to the University of Indiana in the general surgery ward. Describing that time as a “privilege,” Segovia reflects on it as a watershed experience that would change the course of her career. Despite making impressive strides and earning the respect of the colleagues within her profession, Segovia grappled with the enormity of desiring to do more on behalf of other native Spanish speakers.

“I had many responsibilities, and I loved every aspect of it,” Segovia said. “But there was still that missing component of wishing to do more for patients.”

Determined to capitalize on that desire, Segovia enrolled at Red Rocks Community Physician Assistant program, graduating in 2020. Eventually, she moved to Denver, completing a series of rotations to earn experience and hands-on education for her PA. According to Segovia, it was these rotations, which networked her with Colorado’s large Hispanic community, that lead her to discovering her ability to thrive in settings aimed at serving the underserved. These environments helped her to discover her “true calling,” prompting her to return to Tepeyac after completing her initial rotation.

For their part, the leadership at Tepeyac was eager to welcome the ambitiously gifted young physician assistant’s return to their staff, identifying Segovia as ‘a gift’ for their patients.

“In my ten years of working and supervising students, Paulina was by far one of the strongest physician associate students,” Dr. Valenza said. “Not only does she stand out clinically, paying attention to the small details while still moving through and assessing the bigger picture, she has many inherent qualities that make her a stellar provider. She is genuine, thoughtful, compassionate, observant, and a strong advocate for underserved care and serving the community from which she comes.”

Through Tepeyac, Segovia sees herself as an agent of change, working to empower the community from within because of transparency and an unparalleled promotion of trust that prioritizes the wellbeing of the individual patient. Such a focus is crucial to improving care outcomes among patients, migrant and mobile populations who are frequently face disproportionate struggles to access vital health services, including a lack of cultural competency.

“Our mission is to inspire health, wellbeing, and humanity in our community through all life stages, and that resonated with me. We want to ensure access to regular and ongoing healthcare to all of those in our community, and most importantly, to provide cultural responsiveness and strive for trustworthy care that empowers our patients,” Segovia said. “[Tepeyac] truly embodies community, family, and inspires our patients to be empowered, and most of all, to trust that they have access to good healthcare.”

Segovia will receive the Kugel & Zuroweste Health Justice Award at a virtual open ceremony on Tuesday, April 19th at 11am Pacific/1pm Central/2pm Eastern. Anyone who would like to join the ceremony is invited to register to receive the Zoom link.