Relief: Clinician Tactics to Serve Agricultural Worker and Other Vulnerable Patients After a Disaster 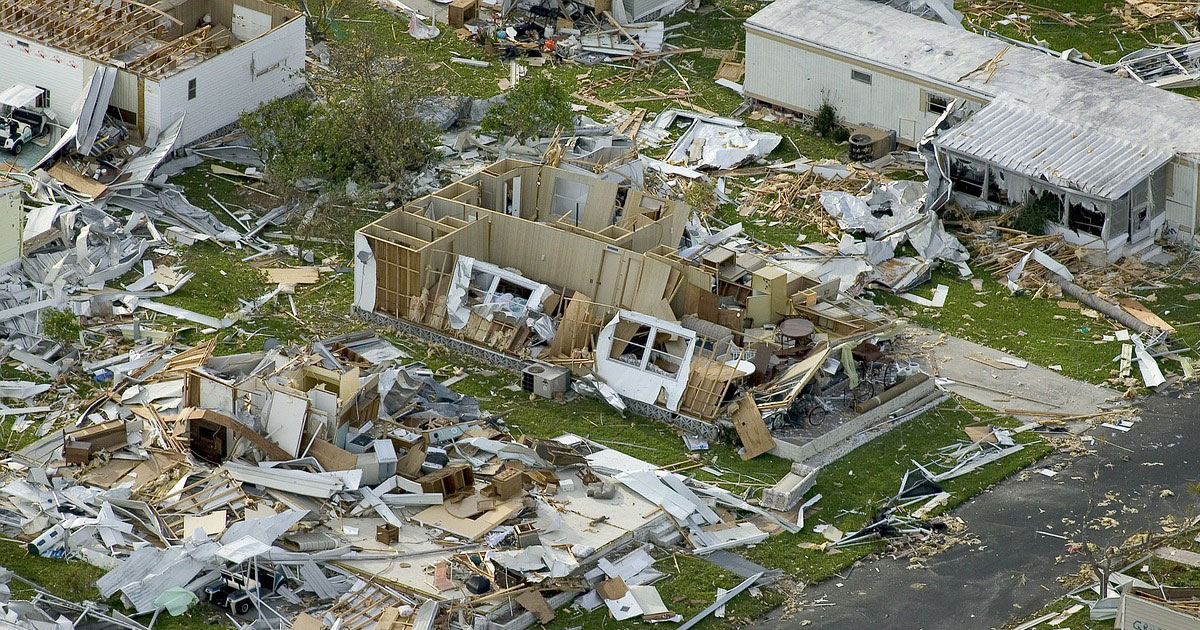 In Sonoma and Napa counties in Northern California, some local agricultural workers who were finishing up grape harvest season lost everything to last year’s fires, including their jobs. After camping out along the coast amid unhealthy air thick with smoke and ash, many returned to their charred neighborhoods to find a tightened housing market in an already price-prohibitive region. With living expenses skyrocketing while wages remain the same, many agricultural workers already felt displaced -- even before the fires. Now, living in Sonoma County is unfeasible. In the weeks following the fires, the median monthly rent in Sonoma County jumped 35 percent to $3224.1 Just two months later, the Thomas Fire cut through farms and neighborhoods in and around Ventura County in Southern California. Despite “purple” air quality and winds – the first time the color designation has been used for wind2 – many agricultural workers continued to work. Volunteers handing out N-95 masks to workers on one farm in Ventura County were ask to leave.3 The workers who didn’t receive masks kept working.

Agricultural workers in California aren’t the only underserved population that has been strongly impacted by a disaster this year. In Houston, Texas, after Hurricane Harvey flooded thousands of homes, a health and safety advocate discovered that most families put their waterlogged belongings in front of their homes so that the damage could be assessed by emergency workers before disposal. Those who were anxious about seeking services, like day laborers, agricultural workers, and domestic workers, dragged their damaged furniture to their backyards, where they attempted to dry it out enough for reuse.4

In Puerto Rico, agricultural communities were cut off entirely -- no electricity, no communication infrastructure, no potable water, and no passable roads -- for weeks. Clinicians quickly began rationing common medications while serving patients from damaged buildings running on generators with low diesel supplies.5 A spike in leptospirosis -- a bacterial infection contracted from drinking water contaminated with animal urine -- that resulted in at least two deaths indicates how rural residents have turned, and continue to turn, to local creeks and springs, many of which were contaminated after the extensive flooding and infrastructure damage.6

While clinicians in each community that experienced disaster tailored their responses to the needs of their patients, a common thread can be found throughout: vulnerable populations like agricultural workers were likely harder hit than the general population, both in the short and long term. Clinicians can best serve agricultural workers by breaking down disaster preparation and response into three phases, each of which requires a different approach: pre-disaster preparation during which health centers develop systems and protocol that take into account vulnerable populations; post-disaster immediate response, in which the community and clinicians are attempting to save lives and minimize further health dangers after the disaster; and longer-term disaster response, which includes addressing disaster clean-up health risks and mental health issues stemming from the trauma of the disaster.

Agricultural workers face numerous barriers to achieve an average level of health even under normal conditions. Many are not eligible for publicly or privately funded health care programs, some lack familiarity with health systems, and many are further stymied by language and cultural barriers. Mobility and poverty, and the many social determinants of health associated with them -- food insecurity, unsafe housing, and limited educational opportunities, among others -- reduce agricultural workers’ opportunities to regain health after a setback.

Consequently, disaster response preparations must account for those with fewer resources. For example, while some families may respond to a clinician’s recommendation to develop a disaster kit with extra food and water, an agricultural worker family struggling with food insecurity may be unable to put their limited resources toward disaster preparation. While boarding up windows may work for a typical home to prepare to weather out a hurricane, an agricultural worker who lives in a mobile home on cinder blocks may need to evacuate. Proximity to manure ponds and chemical storage elevates flood risks, while language barriers, poor integration into the local community, apprehension over seeking assistance, and remote farm locations with limited transportation and communication limits an agricultural worker’s access to and ability to follow evacuation instructions.

“Often the most vulnerable populations, such as agricultural workers, are both the hardest hit and the least likely to promptly seek medical care,” explained Laszlo Madaras, MD, Co-Chief Medical Officer of Migrant Clinicians Network. “Even if willing to seek medical care, distance could be a major factor in why vulnerable populations cannot access such care. This is one reason why health centers should focus emergency preparation close to such workers and remove distance as one more barrier to giving medical care.”

Similarly, after the disaster, clinicians need tools and resources to specifically respond to the advanced and compounded health needs of underserved workers and their families. Recovery efforts must take into account the reality of living in poverty.

As Puerto Rico’s hardworking clinicians explained after three weeks without electricity or communication, even well-developed plans may not account for the level of disasters that North America has recently experienced. While many facilities prepared before Hurricane Maria by stocking a week to ten days’ worth of fuel for backup generators, few anticipated the large scale destruction of transportation and communication infrastructure that continues to hinder regular operations today. Clinicians are encouraged to revisit emergency protocol regularly to update training and planning in light of our changing planet and communities, and in recognition that vulnerable populations will likely be hardest hit in such emergencies.

The village of Castaner, which is served by FQHC Hospital General Castañer, was without electricity, water, or communication for months after Hurricane Maria. Much of the island still remains without consistent power. Photo courtesy of Dr. Jose Rodriguez, General Hospital Castaner.

After initial first response has concluded, communities begin to assess the damage, and in the weeks and months after a disaster, migratory workers arrive to populate cleanup crews. Many of these workers lack health and safety training and consequently may be unaware of the acute and chronic health concerns associated with cleanup. MCN’s post-Harvey webinar, “After the Storm: Lessons Learned on Worker Health & Safety During Storm Disaster Cleanup,” which was presented and archived in both Spanish and English, covered common exposures like mold, water contaminated with chemicals and waste, hazardous building materials, and vermin, and additional risks including unstable structures and carbon monoxide poisoning from generators operating in poorly ventilated spaces. (See “Resources” for a link to the archived webinar.) Exposure to asbestos, silica, and lead are also common for these workers. The webinar brought in trainers who had recently returned from cleanup operations after Harvey, to report back on the hazards workers are facing and to outline strategies for reducing occupational injuries and exposures, including what to include in worker trainings, like personal protective equipment, how to read safety data sheets, and how to access local resources.

“Exposures during cleanup are preventable with active measures like training and provision of personal protective equipment,” noted Amy Liebman, Director of Environmental and Occupational Health for MCN. “For the low-paid and often under-trained workers, such efforts can have long-term positive health consequences.”

Even months or years after a crisis, many in the community may still be suffering. The long-term health effects of trauma must be taken into account, long after new houses are built. Low-income patients lack the resources that many rely on for resiliency after a disaster. Tenuous or temporary work situations may reduce their income, language and cultural barriers and apprehension may halt access to recovery efforts, and more. Mental health issues after a disaster often plague an entire community, but among some cultures, seeking help for such concerns as post-traumatic stress disorder is frowned upon. The long-term needs of vulnerable populations must be factored into recovery efforts.

Read MCN’s recently updated Emergency Preparedness, Response, and Recovery webpage for a comprehensive list of resources including the following. http://www.migrantclinician.org/issues/emergency-preparedness.html

The material presented in this portion of Streamline is supported by the Health Resources and Services Administration (HRSA) of the U.S. Department of Health and Human Services (HHS) under cooperative agreement number U30CS09742, Technical Assistance to Community and Migrant Health Centers and Homeless for $1,094,709.00 with 0% of the total NCA project financed with non-federal sources. This information or content and conclusions are those of the author and should not be construed as the official position or policy of, nor should any endorsements be inferred by HRSA, HHS or the U.S. Government. 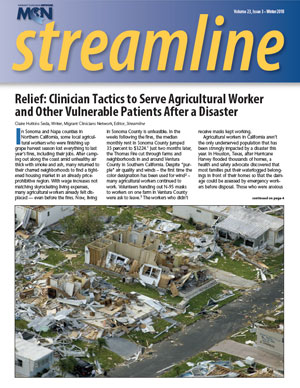 Read this article in the Winter 2018 issue of Streamline here!