Urgent Care During Migration, Interrupted by a Hurricane 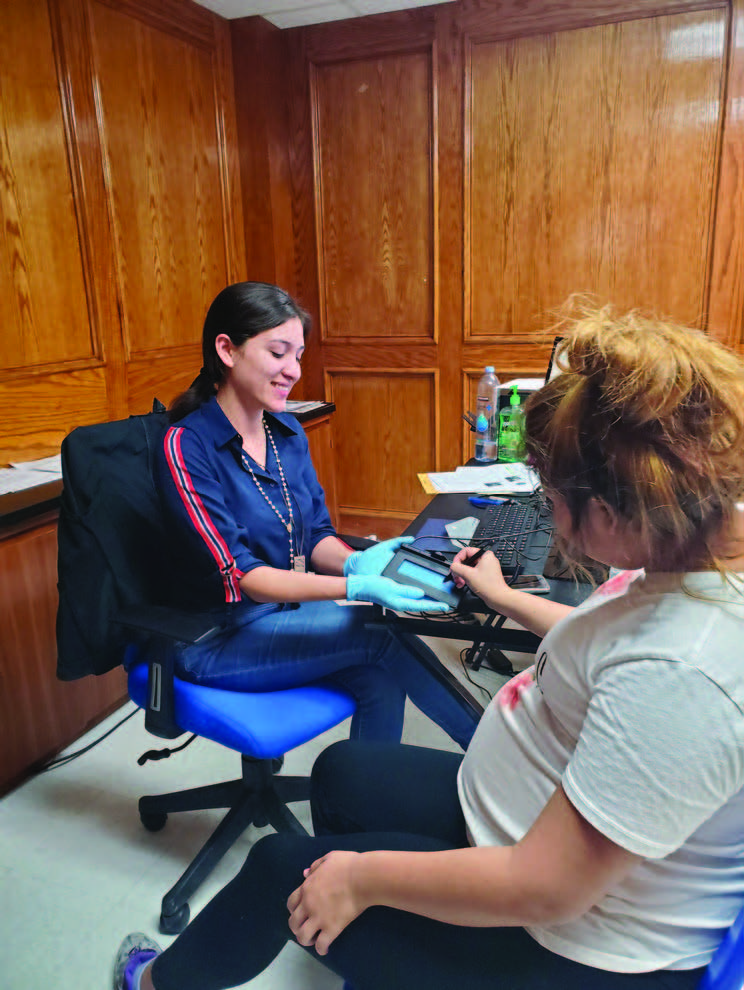 Climate change increases migration, but it also disrupts it. Health Network Associates are learning to provide virtual care in the midst of an emergency.

The 2020 Atlantic hurricane season was unprecedented, with 30 storms receiving names, requiring the naming agency to circle back to the beginning of the alphabet. With the exception of just one county, every county along the entire Eastern seaboard – from Texas to Maine -- had at some point in 2020 been under tropical storm or hurricane watch or warning.1 Climate models disagree as to whether climate change increases the frequency of storms, although each of the last six years has recorded an above-normal number of storms.23

Climate models are clear, however, in demonstrating that the number of intense storms will continue to increase, with higher rates of rainfall due to slower-moving and warmer, wetter storms, and increased storm surge as sea level rises.4

These climate impacts are felt not just here in the US but throughout the Americas. Health Network, Migrant Clinicians Network's virtual case management system for migrants and asylum seekers, has served several patients who report that the decimation of croplands and the associated reduction of economic stability as a result of hurricanes factored into patients’ decisions to migrate – along with other push factors, like violent threats from gangs, political instability, and deep poverty. This was particularly noted after two hurricanes hit rural poor regions of Honduras in 2020.

Some of these same asylum seekers, however, find that the climate impacts are unavoidable, no matter where they move. Marisa* gave birth at a medical center in Texas near the US-Mexico border shortly after requesting asylum. She and her newborn were seen at a local immigration shelter a few days later by Annie, a midwife with whom MCN works. Annie referred Marisa to be enrolled in Health Network. A Health Network Associate at the immigration shelter completed enrollment for Marisa, and passed the case to Nahiely Garcia, whom we call Pinky.

As Marisa traveled to join family members on the East Coast, Pinky worked to establish a medical home for Marisa and her baby so they could quickly begin care at a health center close to their new home, without disrupting well-baby and postpartum care. Pinky tried to set up an appointment for Marisa, but the health center refused because their protocols required Marisa to call on her own behalf. Pinky did manage to transfer medical records from the hospital at the border and the immigration shelter to the new clinic.

Just weeks after Marisa moved to the East Coast, Hurricane Laura approached. That same week, Marisa reported to Pinky that she was still bleeding as she had for weeks after delivery. Pinky responded quickly by working with her to get her into care. The following day, Pinky called Marisa’s local clinic and set up an appointment for her that week. Pinky called and sent multiple text messages to Marisa to inform her of the appointment. But, as the appointment date approached, Marisa was not responsive.

“I was really concerned, and decided to make a last attempt via WhatsApp,” an app that is highly popular among migrant and immigrant patients from Mexico and Central America, that allows messaging via WiFi and doesn’t require cell service.  Marisa responded, with a string of sad emojis. “A hurricane had hit her state, and they were out of electricity and phone signal. The only source of communication they had was through WhatsApp because they could pick up WiFi,” at nearby locations that had power, Pinky recorded in the notes to Marisa’s case.

Marisa had missed her appointment because of the hurricane. Pinky worked with her and the clinic once more to reschedule. She also sent her more information about postpartum care via WhatsApp. With Pinky’s help, Marisa’s newborn had regular well-child visits and Marisa’s postpartum concern was quickly addressed, after the dangers of the storm passed and Marisa once again could communicate.

Disruption of care due to migration can be compounded by disasters and emergencies that destabilize receiving communities. To address some of these concerns, Migrant Clinicians Network is looking to introduce Health Network as a tool to track and find care for displaced patients during emergencies, including through MCN’s disaster management projects in Puerto Rico. These efforts presently assist health centers and community organizers in mapping out communities to determine which community members could potentially require the most assistance after disaster, either because of chronic illness, rural locations, language barriers, or health inequities that elevate their vulnerability should they be cut off from a health center. The Puerto Rico team hopes to expand these efforts by integrating Health Network to provide virtual assistance to a community when disaster strikes.

As climate change progresses, virtual care coordination will become a critical component to ensure equitable responses to disasters. Health Network is at the forefront of these efforts. 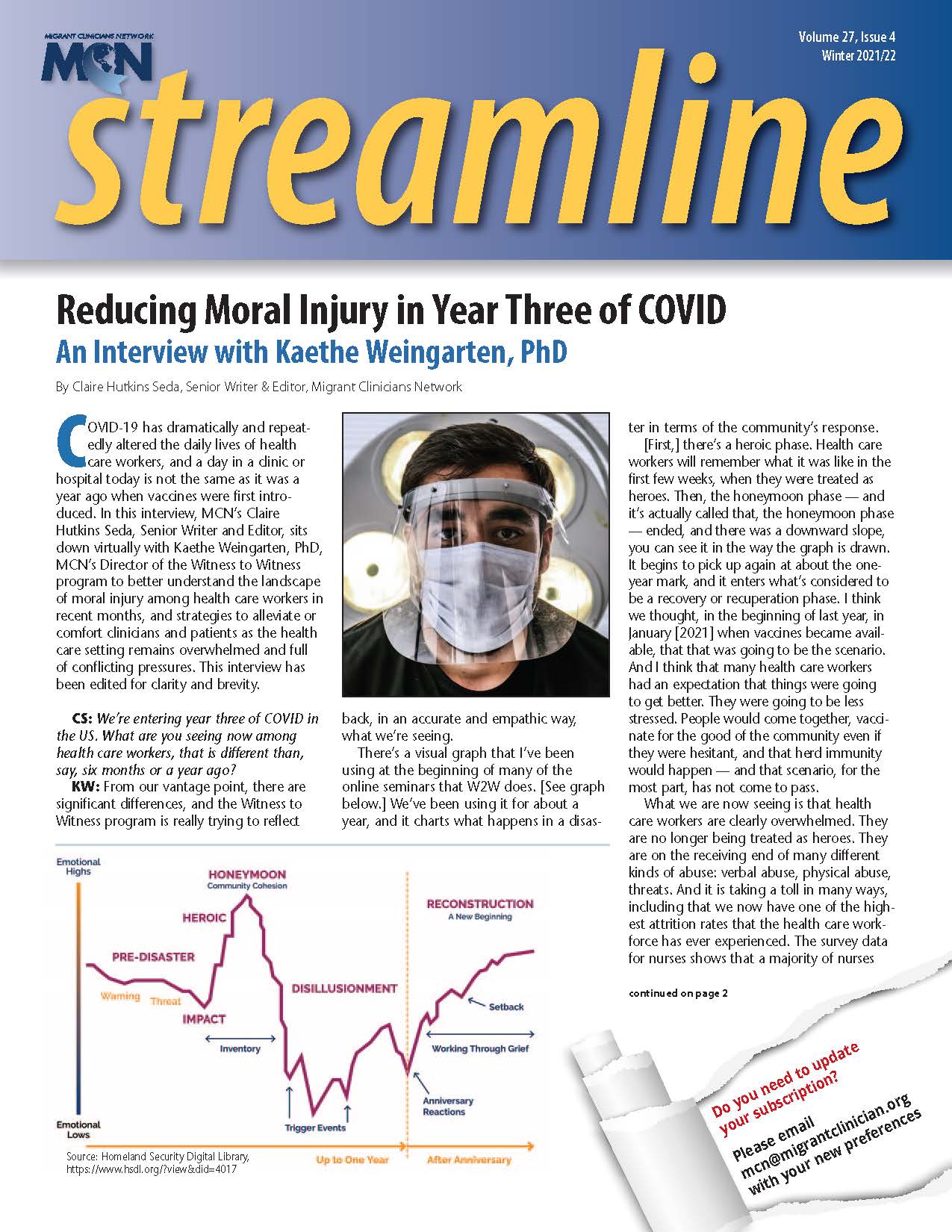 Read this article in the Winter 2022 issue of Streamline here!