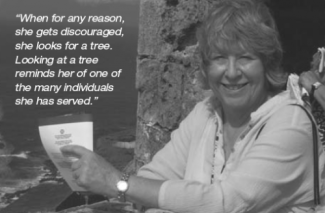 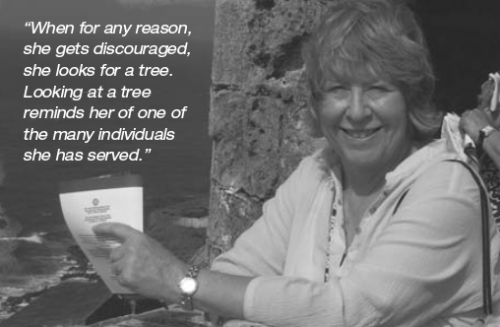 [Editor’s Note: This week, we mourned the passing of Carolyn Davis, FNP, a longtime friend of Migrant Clinicians Network, a dedicated clinician at Beaufort Jasper Hampton Comprehensive Health Services, and the 2010 recipient of Steve Shore Community Catalyst Award.  Karen Mountain, MBA, MSN, RN, Migrant Clinician Network’s CEO, remembers Carolyn’s optimism and “can-do” attitude.  “She always seemed to have something good to say about almost every challenge we discussed,” Mountain recalled. “She loved her work and her life and she felt honored to serve farmworkers.”

“It was an honor to have known such a loveable and kind person and I will truly miss her,” said Galdys Cate, from the Office of National Assistance and Special Populations, Health Resources and Services Administration.  “Her contributions as the Chair of the National Advisory Council on Migrant Health were outstanding.  She was always ready to help the farmworker patients.  Carolyn Davis will always be in our memories.”

The following profile of Ms. Davis was first published in Streamline, MCN’s clinical publication, in the November/December 2010 issue. The piece was written by Jillian Hopewell, MPA, MA, Director of Education and Professional Development at MCN.]

I first met Carolyn in 1997, when a group of us at MCN embarked on an epic journey in a rented RV from Austin, Texas to Ashville, North Carolina for another East Coast Migrant Stream Forum. I was five months pregnant with my first child, my husband was the volunteer driver, and along with three other women from the staff we set off for a two-week tour of health centers in seven southeastern states.

Our adventures were nearly halted in Eutaw, Alabama, when we realized that the shoestring operation we’d used to rent the RV didn’t actually have insurance that covered us. But our intrepid leader, Karen Mountain, figured out some way around that hurdle from her post in Austin and we continued eastward.

Every stop along the way was unique and we were awed by the creativity and dedication we witnessed at each subsequent health center. On day six we rolled into Beaufort, South Carolina, a bit road weary and overwhelmed by all we had seen. We parked our monstrous RV in the parking lot of Beaufort Jasper Hampton Comprehensive Health Services, Inc. and were met in the waiting room by the Migrant Health Coordinator, Carolyn Davis, the most gracious and enthusiastic person we had yet encountered in a trip full of wonderful people. Carolyn took one look at us and declared us in dire need of the best local fare. We followed her out through the beautiful flat coastal lowlands to a hole-in-thewall on the dock called The Shrimp Shack. The “Shack” specializes in shrimp burgers made from the fresh catch hauled onto the dock daily. Unfortunately they will not reveal their recipe, but to this day that is one of the best meals I have ever had.

Beaufort Jasper Hampton Comprehensive Health Services, Inc. is located in the midst of the “low country” of South Carolina. This is a beautiful part of the United States; a land of spreading moss-covered oak trees, palmettos and thousands of acres of stately southern pine. The marshy coastal region is made up of many small islands, including exclusive resort islands such as Hilton Head. From her home on a nearby island, Carolyn can hear the guns from the Marine training grounds on the neighboring Parris Island.

This region is also known for its agriculture, particularly for tomatoes and watermelon in the summer with winter vegetable crops such as winter squash, collard greens and sweet potatoes. Unlike some other regions of the country, the crops in this area of South Carolina are still largely worked by migrant farmworkers, many of whom travel up from Florida, others of whom come from Mexico, Central America, or Texas. Most of the migrants in this region are Hispanic families and young single people; however there is still a contingent of Haitian workers who primarily work in the packing sheds. Once the picking season is over in the Beaufort Jasper area, many of the same farmworkers travel further north to the Delmarva Peninsula where the season begins a couple of months later.

While agricultural employment has remained stable in this region, in recent years many migrants have also found work in the booming construction industry, particularly in the upscale resorts of the barrier islands. The increase in luxury housing on the barriers islands has moved more of the agricultural production inland. As Carolyn says, the islands now “grow more condos then veggies”.

Carolyn Davis did not start her career with the intention of working with migrant farmworkers. The daughter of a career Navy man, she moved regularly as a child, graduating from high school in Guantanamo Bay, Cuba. She received an associate degree in nursing from Florida Junior College, eventually graduating from the University of South Carolina with a BA and a Masters in Nursing. At that point she went to work for the local county hospital where she was the Director of Nursing.

In the early 1980’s, for a variety of reasons, Carolyn was looking for a change. She decided to explore the world of community health and left her job with the hospital to work for Beaufort Jasper Hampton Comprehensive Health Services, Inc. At the time she was unaware that there were even migrants in the area. The only thing she knew was that during the summer months hospital emergency room staff saw a jump in the number of people coming in. It took her only eight weeks to fall in love with the work and she has worked as the director of the migrant health program since that time. In addition to being the Migrant Health Coordinator, Carolyn was also
appointed the Director of Nursing for the health center. In the mid-90’s Carolyn went back to school and received her family nurse practitioner degree from the Medical University of South Carolina. 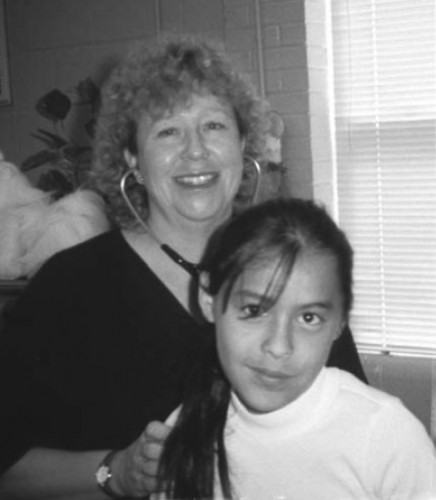 The migrant health program at Beaufort Jasper has grown tremendously and now serves farmworkers from three counties and a large number of migrant camps. The program runs year-round, but the biggest push comes during the 6-8 weeks of harvest time when there is a large influx of migrant workers. During this time, Carolyn brings in many different professionals from the community and the clinic to provide a wide array of services to the migrant patients. Most of these services are provided during the night clinic where they have seen as many as 87 people in one night. Carolyn says that the night clinic is “controlled chaos that somehow works”. She typically has people lining up to work in the migrant program long before the season begins.

In addition to the clinic time, Carolyn runs a number of outreach efforts in the migrant camps throughout the region. Outreach in the camps includes health education, screenings and mini physicals. When doing outreach, Carolyn often serves a number of different roles including advocacy, screening and referrals for further care.

Carolyn says that over the course of her career some things have improved for the migrant population while others have worsened. She believes that some of the prevention messages have made a real impact, especially in decreasing rates of sexually transmitted diseases and acute pesticide poisonings. At the same time, the migrants she sees continue to suffer from a number of musculoskeletal problems, dehydration and fatigue. Additionally, she sees more and more chronic disease, mirroring what is happening throughout the rest of the country, except that the patients she treats are often sicker and harder to manage. Finding specialty care is particularly difficult and Carolyn has to employ a number of different strategies to get people into care that they need.

A positive development has been the health center’s increasing use of MCN’s Health Network to help manage and track mobile patients. Carolyn says that Health Network “is a must for all of our diabetic patients, people with tuberculosis, our prenatal patients and anyone we screen for cancer.” In the past Carolyn says that she would have put off doing a mammogram for a woman she knew would be traveling soon, but since the advent of Health Network she knows that she will be able to find the woman and get her in care if necessary. Rosa Navarro, from the North Carolina Community Health Center Association (NCCHCA) tells the following story about Carolyn.

”When for any reason, she gets discouraged, she looks for a tree. Looking at a tree reminds her of one of the many individuals she has served. In 1986 during an evening clinic, a week before a group of farmworkers were scheduled to leave South Carolina, the physician noticed that a young man was having difficulty seeing. A visual test and health history revealed that he was almost blind and had been that way since childhood. He was able to work because he learned to use his other senses and because he had help from his co-workers. She remembered securing immediate, free consultation with an ophthalmologist by working with a local church to pay for glasses. When the young man used his eyeglasses, for the first time he noted the large object outside the window and exclaimed ‘tree’! This was the first time he had actually seen one in its entirety. Because he had never seen clearly in his life, he even had difficulty walking. Carolyn held his hand as he took his first unsteady steps. The sense of accomplishment has never abandoned Carolyn, because she believes that if she can help one person to see a tree for a first time, she can certainly line up the stars again to increase access and continuity of care for other farmworkers.”