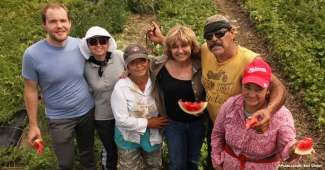 A new policy research brief released in May explored how migrant health centers and their patients are faring under the Affordable Care Act (ACA) -- and their conclusions are encouraging, but mixed. The brief, completed by the Geiger Gibson/RCHN Community Health Foundation Research Collaborative, reviewed the most recent data from health centers on their migratory and seasonal agricultural worker (MSAW) patients, to uncover a number of key changes in the last decade, particularly for MSAWs living in Medicaid expansion states. Here are some of the findings of the research brief:

The numbers: Increase in farmworkers, increase in migrant health centers

The effects of the ACA on agricultural worker populations are evident in the changes to uninsured rates.  In 2000, 85 percent of agricultural workers lacked health insurance. By 2012, two years after the ACA went into effect, the number had dropped to 66 percent.  The drop was significantly steeper among children: In 2000, 90 percent of MSAW children patients were uninsured, falling  to just 18 percent uninsured by 2012. What’s more, the overall MSAW uninsured rate declined faster than that of overall low-income adults. Yet, the brief found that agricultural workers remain twice as likely to be uninsured than other low-income adults and MSAW children still lacked health insurance at a “substantially higher rate” than non-MSAW low-income children in 2012.

Where we’ve been shows us where to go

The authors of the brief are clear in the import of their conclusions: “This analysis shows that the Medicaid expansion matters, not only to low-income populations generally, but also to agricultural worker populations most at risk for low rates of coverage and care.”  While the increase in health coverage among agricultural workers is encouraging, the authors note that grant funding still plays a critical role in assuring health access for this underserved population, as MSAWs continue to lack health insurance at higher rates than the overall low-income population.  Read the complete report here.