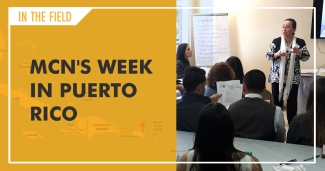 In the Field: MCN's Week in Puerto Rico

In the Field: MCN's Week in Puerto Rico 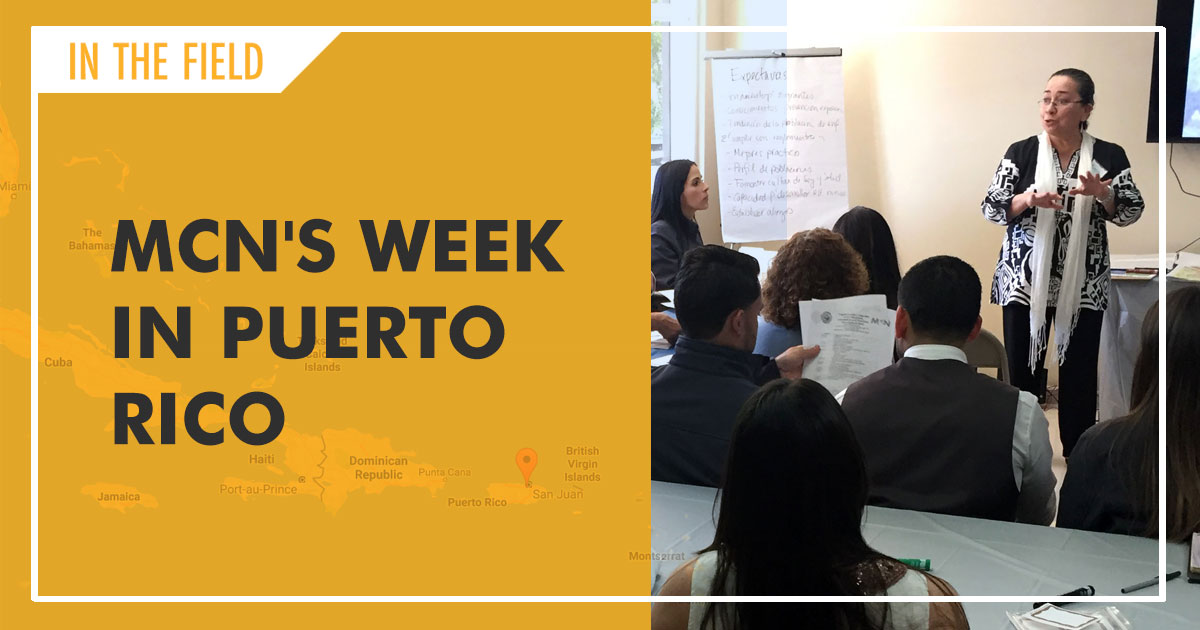 Over the first weekend in April, Galván and Garcia conducted a research project on how sexual history is taken in health centers as part of large-scale MCN Zika program, in partnership with the National Association of Community Health Centers (NACHC). Galván and Garcia conducted two focus groups and several interviews with physicians at Hospital General Castañer in Castañer and Corporación de Servicios Médicos in Hatillo.

The research team supported by staff at Hospital General Castañer stayed on at Hospital General Castañer for two more days implementing MCN’s Cost of Care project, a part of a newly launched effort supported by the Robert Wood Johnson Foundation. The main goals of this research project are to: (1) understand the interactions between patients and their health care providers concerning cost of care and emotionally charged topics; (2) increase training for health care providers addressing cost of care with their patients; and (3) increase discussion of Cost of Care between clinicians and patients. As part of the research protocol, the research team shadowed patients along all the steps of their medical visit. Dr. Jose Rodriguez and the Hospital General Castañer staff were pivotal in helping MCN’s team carry out their research.

After conducting research in Castañer, the team headed to Centro de Salud de Lares Inc. Dr. Francisco Ball, the chief medical officer of the health center, recognized the importance of participating in such innovative research program and welcomed MCN staff to carry out their research.

“The training, which brought together 30 participants from throughout Puerto Rico, was very well received,” Galván noted. Daniel Ramos, from the Asociación de Salud Primaria de Puerto Rico gave a presentation about the importance of collecting data about Environmental and Occupational Health through the EHR and their willingness to implement such a program in all Health Centers in Puerto Rico. Meanwhile, Garcia continued working on the Cost of Care project at Centro Salud Lares, Inc.

The week concluded with an important monitoring visit at Corporación de Servicios Médicos, our partner in the Workers and Health project, in which MCN partners with Federally Qualified Health Centers (FQHCs) across the US and Puerto Rico to establish Centers of Excellence in Environmental and Occupational Health. (Check out our newly launched interactive map of all of our Centers of Excellence.)

“Corporacion de Servicios Medicos Inc. is in the last period of project implementation, and this monitoring visit was important to provide follow-up with their work plan, collect information about best practices and obstacles and overview the process of implementing an Environmental and Occupational Health section in the Electronic Health Record,” Galván explained. After what Galván described as “a very welcoming and productive meeting,” MCN staff left Hatillo to finish up work in Lares, PR.

After a very full week, the MCN team headed back to the mainland, exhausted but satisfied by the work, and appreciating the support staff from our partner health centers. “Their help was pivotal for the success of such an ambitious week,” Galván stated, adding that Puerto Rico provided an idyllic backdrop for the work and the communities were very welcoming. “We were thankful for the warmth of the people and the great Puerto Rico culinary experiences that everybody offered,” she added.