On the Path to Health Justice: Marysel Pagán Santana

On the Path to Health Justice: Marysel Pagán Santana 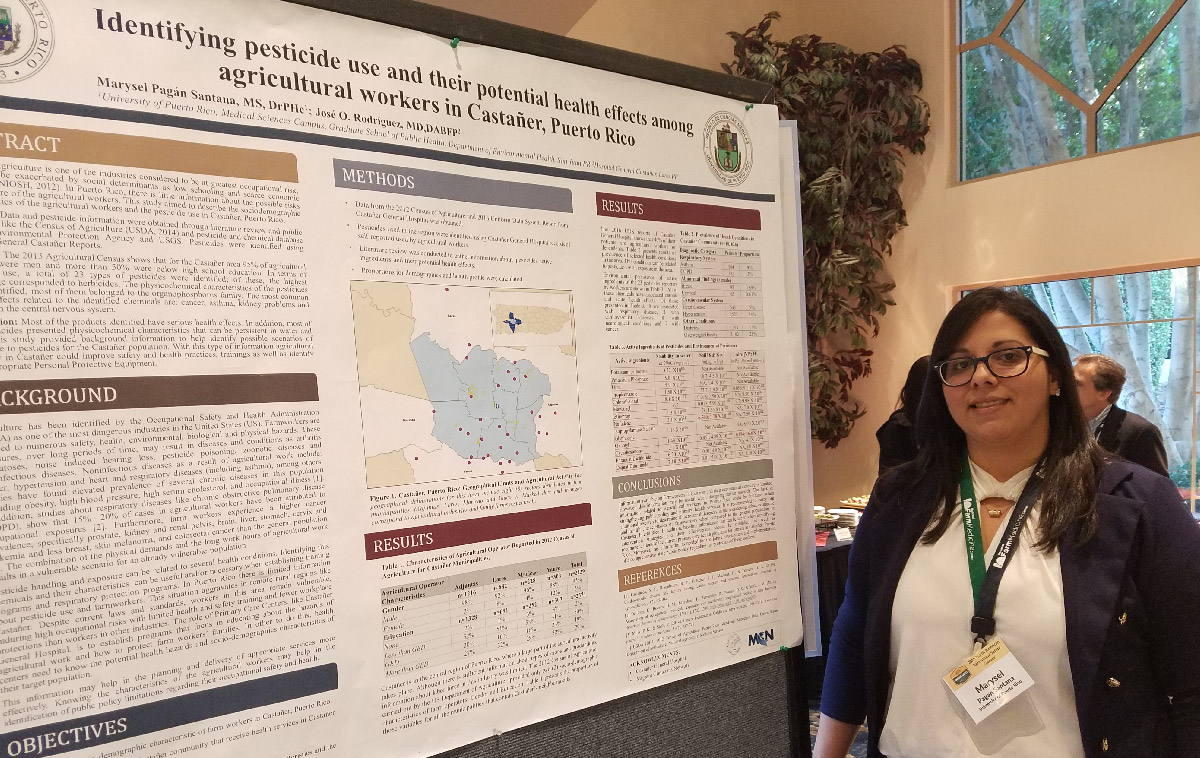 Irma, Jeanne, Hugo. Bertha, Dean, Otto. Over the last 30 years, Puerto Rico has seen numerous devastating hurricanes, but last year’s Hurricane Maria was the most deadly, the most damaging. With more deaths than Hurricane Katrina, the record-breaking storm continues to affect the daily lives of Puerto Ricans, over a year later. The life of Marysel Pagán Santana, MS, DrPHc has been shaped by hurricanes. As an undergraduate, she took courses in environmental health and safety, where she was initially interested in the health needs of first responders after disasters, but she began to see a wider circle of professions with unique post-disaster needs.

“Every time there’s a hurricane, there were risks to the guys working on the power lines,” Pagán Santana recalled, remembering the news reports of workers burned. “Even though they’re not classified as first responders, they’re in the middle of the disaster. I started taking classes related to that, and focused on getting a Master’s degree that would let me work on it.”

Upon completion of her Master’s degree in Industrial Hygiene, from University of Puerto Rico School of Public Health, Pagán Santana immediately continued on to begin her Doctorate in Public Health. She planned to move into research, focused on laboratory work. But then, she encountered Migrant Clinicians Network.

“I met Amy Liebman [MCN’s Director of Environmental and Occupational Health], and we started talking about agricultural workers and the new Worker Protection Standard, and how it would be very important in Puerto Rico,” Pagán Santana said. “I thought it wasn’t going to work in Puerto Rico. We talked about how federal agencies often don’t take into consideration what happens on the island, but the island is subject to their regulations. It would be hard to implement, with a short-staffed EPA and because agricultural workers aren’t a priority on the island.” Despite her incredulity, the conversation excited Pagán Santana, which brought to life for her the possibility of tangible steps forward in protecting vulnerable worker health. In 2016, she applied for an internship with MCN.

Through her internship, she began training agricultural workers in pesticide label laws, chemical safety, and heat stress. Through MCN’s train-the-trainer program, those workers would then provide trainings to their coworkers. She went to Hospital General Castañer, a community health center with close ties to MCN, and went out to the farms themselves.

“After six months working with agricultural workers through MCN, I ended up changing my dissertation project,” she laughed. She was also recognized for her hard work with the Justice Health award of the UPR Medical Sciences Campus 37th Annual Research and Education Forum, an institutional award presented by the Deanship of Academic Affairs. “After that, I let my director know the news that I wanted to focus on the health profile of agricultural workers in Castañer and the surrounding region,” Pagán Santana explained. Her internship had demonstrated a dearth of data around agricultural worker health, nor on pesticide use and exposure. She was slated to present her work at the American Public Health Association conference last year, until Hurricane Maria struck. Again, the health and well-being of the most vulnerable was at the top of mind.

Six months after Hurricane Maria, MCN began a new project that was closely aligned with Pagán Santana’s career path and lived experience. The project, “Mobilizing Communities in Puerto Rico to Meet the Needs of Vulnerable Populations Before, During, and After a Natural Disaster,” is a multi-year effort that seeks to apply a community mobilization framework to emergency preparedness and to reinforce, replicate, and institutionalize the leadership efforts that community health centers showed after the disaster, in preparation for the next one. Pagán Santana’s experience and interests, combined with her Puerto Rico network, made her the ideal candidate for the on-the-ground Program Manager. She joined the MCN team at the end of the summer.  The first year of the project will bring her back to Castañer, one of two communities chosen to pilot the project, to again help the community that she has dedicated a lot of her work toward.

“These communities were so isolated after [Maria]. We know there are strong people there who have shown the resilience to be a key to the development of the community’s capabilities to work through and protect health of the community”, Pagán Santana said.

“The internship helped me focus on intervention and community empowerment,” she said. “It may seem like it’s a new path, but it’s really just a new focus on something I really liked, which was working within the communities and seeing the results.” As for her new work with MCN, as Program Manager: “This is the best way to help people in Puerto Rico and use my skills in a productive way.”