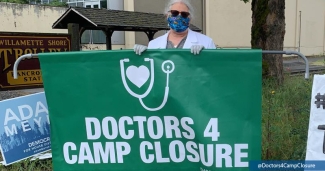 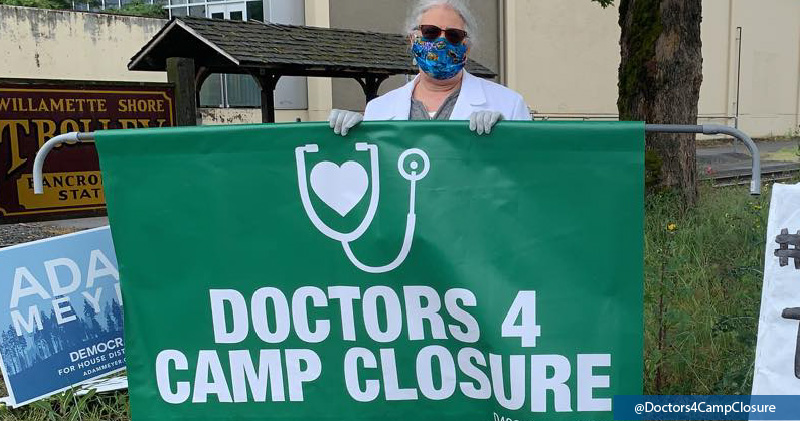 A clinician protests the conditions in migrant detention facilities in Oregon. Credit: @Doctors4CampClosure

Last week, a whistleblower complaint was filed describing medical procedures forced on detainees at a detention center, violating their basic human rights. Migrant Clinicians Network calls for a thorough and immediate investigation into the complaint, which too closely mirrors injustices perpetrated against people of color by health authorities throughout the history of the US. Since our inception, Migrant Clinicians Network has called for an end to human rights violations at detention centers. We call for an end to the abuses, which include denial of urgent medical care that has resulted in the deaths of detainees that have occurred for decades.

The procedures as described are an egregious, shocking, and unacceptable abuse of human rights. While an investigation will reveal the full extent of the complaint’s veracity, these abuses as described follow a pattern of the disregard of human rights and severe medical neglect at the detention center, which is operated by LaSalle Corrections. The whistleblower complaint also details the detention center’s refusal to implement basic infection control measures to reduce the spread of COVID-19 among detainees and employees, including: “refusal to test detained immigrants for COVID-19 who have been exposed to the virus and are symptomatic, shredding of medical requests submitted by detained immigrants, and fabricating medical records.” LaSalle Corrections’ facilities have a “thoroughly documented history of negligence leading to the deaths of inmates in its custody,” according to Mother Jones, and yet the business’s detention centers continue to operate, with more than 7,000 detainees subject to their abusive practices, through highly profitable contracts with ICE.

While MCN recognizes the need to uncover all of the facts before reaching conclusions, the complaint is in line with the US history of medically unnecessary procedures forced upon people of color, including forced sterilizations. This complaint once again brings forth the injury that such procedures take, not just physically and mentally on those who were abused, but to low-income women of color who may fear interaction with health authorities due to distrust and past abuses to people in similar positions without agency.

Forced medical procedures that violate basic human rights have occurred under the direction of US authorities for centuries. The patients are often those who are already vulnerable, including Black and immigrant patients who lack agency.  Earlier this month, Migrant Clinicians Network’s CEO, Karen Mountain, MBA, MSN, RN, spoke to the National Academies on equitable COVID-19 vaccine provision. COVID-19 vaccine hesitancy among vulnerable populations is warranted, she said, adding, “we must recognize and address this tragic racist past in our shared medical history.” The horrifying declarations in this whistleblower complaint and subsequent interviews, maintaining that women are being sterilized unnecessarily and without consent, demonstrate that our tragic racist past is also our present. Migrant Clinicians Network is committed to health justice for the most vulnerable. As a nation, we pride ourselves on fair and equitable treatment for all. Immigrants in detention facilities must be provided with basic human rights -- including health care. MCN stands with our partners to push for an end to these heinous abuses of detained immigrants.