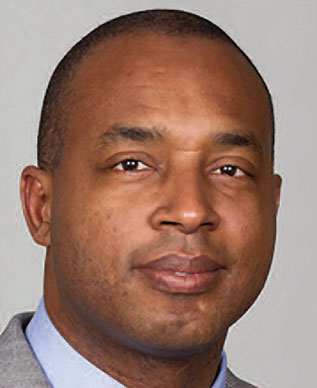 [Editor’s note: This article is part of a series on the lives of members of Migrant Clinicians Network’s External Advisory Board. Learn more about the board at http://www.migrantclinician.org/about/external-advisory-board.html.]

Selwyn Rogers, Jr., MD, MPH, FACS, began his career as a trauma surgeon. During a fellowship at Brigham and Women’s Hospital, which is associated with his alma mater, Harvard University, he noticed a trend among his patients.

“It was clear to me that trauma, especially intentional trauma, was not random. In the city of Boston, disproportionately the people getting shot or stabbed were people of color,” Dr. Rogers recalled. The realization brought him back to why he studied medicine in the first place: to use his skills to help as many people as he could. He began to question whether he could do more to serve others, before they were victims of trauma. “I can do a lot of laparotomies, open people’s bellies and sew up holes, but what was I doing about upstream determinants of disease? What did I understand about processes of care and their link to outcomes? What did I understand about variations? About epidemiology, about statistics? The answer, after almost a decade of training: absolutely nothing.”

With a wife and two young children in tow, and while on call as a trauma surgeon, Dr. Rogers went back to school to receive a Master’s in Public Health at Vanderbilt University. When he returned to Boston, Dr. Rogers developed a violence intervention and interruption program to stop the retaliatory cycle of violence after a gang-related shooting, through targeted community health worker engagement — an unusual step for a surgeon. He developed a population-based perspective of the social factors that influence community violence or prevent people from accessing health care when they need it — the types of social determinants of health that influenced his work ever after, including now, as he serves on Migrant Clinicians Network’s External Advisory Board. He is the only surgeon on the Board. “We picked Dr. Rogers because he brings his perspective as a clinician who has worked to address community violence, an issue that has a profound impact on agricultural workers,” explained Karen Mountain, RN, MSN, MBA, Chief Executive Officer for Migrant Clinicians Network, adding that he has a “in-depth understanding of special populations who, like agricultural workers, face social isolation and who may have an inherent distrust of the health care system.” Additionally, Dr. Rogers has brought to the EAB a willingness to translate his expertise in urban violence to the largely mobile immigrant population that MCN serves.

Dr. Rogers’ life intentions to serve as many people as possible were developed early, while growing up without much on St. Croix in the United States Virgin Islands. “Early on, my mom did a lot with a little,” Dr. Rogers said. His mother put a strong emphasis on education as a pathway out of poverty and a gateway to service. He did exceptionally well academically, and early mentors encouraged him to go into medicine. When it was time to apply to universities, young Selwyn pulled down the Encyclopedia Britannica to determine what medical schools to apply to. “The only things under [the entry for] ‘Medical Schools’ were Johns Hopkins and Harvard,” he laughed. He was accepted to both. After a short stint at Johns Hopkins on a full ride scholarship, he called up the Dean at Harvard to confess that he had made a mistake and wished to transfer. The Dean got him in, and assured he got the financial assistance he needed. He graduated from Harvard Medical School in 1991.

Searching for the Greatest Impact

After receiving his MPH, Dr. Rogers began a series of positions where he continually strove to make the biggest impact in his day-to-day work, starting as a trauma surgeon at Brigham and Women’s Hospital and professor at Harvard Medical School. He then became chief surgeon and department chair at Temple University in 2012, in North Philadelphia, an economically depressed community that he says is tormented with “burned-out homes, burned-out lives, and severe poverty.” “People present to Temple University with advanced stages of disease that you would say, ‘we are still in 1920,’” despite proximity to the hospital, he stated. His work in Philadelphia demonstrated the impact of poverty on health — and shaped his perspectives on the health system at large.

“Transparency [in health care] is what I’m the most enthusiastic about,” he said. He recognizes that some inequities in the US health system still exist, despite efforts to alleviate some of the lack of access. Some patients are able to navigate the system; others cannot. “It’s a system that’s porous,” he says, that leaves behind populations without power — like the poor, minorities, women, unemployed men, immigrants lacking authorization to work — and “those who just don’t have the social support and network that my kids are blessed to have,” just by the social circumstances under which they were born, he said. “How just is that?”

Now, he continues to push for the rights of the underserved as Vice President and Chief Medical Officer for University of Texas, Medical Branch Health System in Galveston, Texas. His recent move to Texas was once again predicated on a desire to increase his impact, believing that the “greater context” of the huge service area along the US-Mexico border offered an opportunity for his leadership to positively affect the lives of even more patients in need: “What greater impact can you make than as the Chief Medical Officer of a health system in Galveston, that covers a landmass of patients that’s half of New England?”

Given the turmoil of intentional violence and alarming health disparities in one of America’s great cities, Chicago, Dr. Rogers will push forward with a new challenge in 2017. Dr. Rogers will serve as the founding Director of the Trauma Center and Executive Vice President of Community Health Engagement at The University of Chicago. “In these roles, I will lead strategic initiatives to address social determinants of disease and population health on the South Side of Chicago,” he said.

Lessons along the way

Dr. Rogers, like many health professionals, has struggled with work-life balance. During his time at Temple, while battling health issues and managing stress, he began to feel burned out. “That was a hard lesson for me,” he admitted. His genetic makeup, mixed with lack of sleep, poor eating habits, and not enough exercise is “a recipe for death. Who can I help if I’m dead? I can’t help my patients, I can’t help my kids — I’m just another statistic.” So he began to slowly adopt a healthier lifestyle. “Emphasizing self-care is so important,” among clinicians, he said. (Read more about the work-life balance in this issue’s article, “A Clinician’s Guide to Burnout and Balance.”)

Despite the added pressures of the positions he’s chosen, Dr. Rogers is adamant that recalibrating regularly is essential for clinicians — not just to avoid personal burnout, but to keep reminding ourselves of the importance of our work. “[We] need to remain steadfast to the principles that got [us] to make the commitment to hard work in the first place... to serve others,” he said. “Somewhere along the line — with the insurance categories, the paperwork, the Affordable Care Act, value-based purchasing — there [have been] artificial barriers placed between the patient and provider.” He calls on clinicians to strengthen the sanctity of the relationship between clinician and provider, by listening, by treating patients with respect — and to go a step further.

“We still have power that our patients may not have, especially those serving patients who have no voice, like migrant workers,” he said. “If you have power as a physician — the education, the background, your resilience, your income, your standing in society — you should speak to power…. Physicians need to stand up more. We’ve got to be the voice of the patient.” 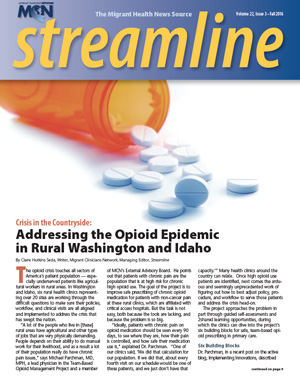 Read this article in the Fall 2016 issue of Streamline here!

Return to the Streamline Fall 2016 Table of Contents.