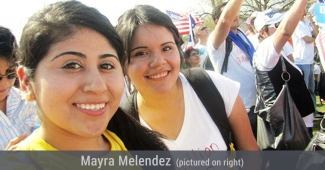 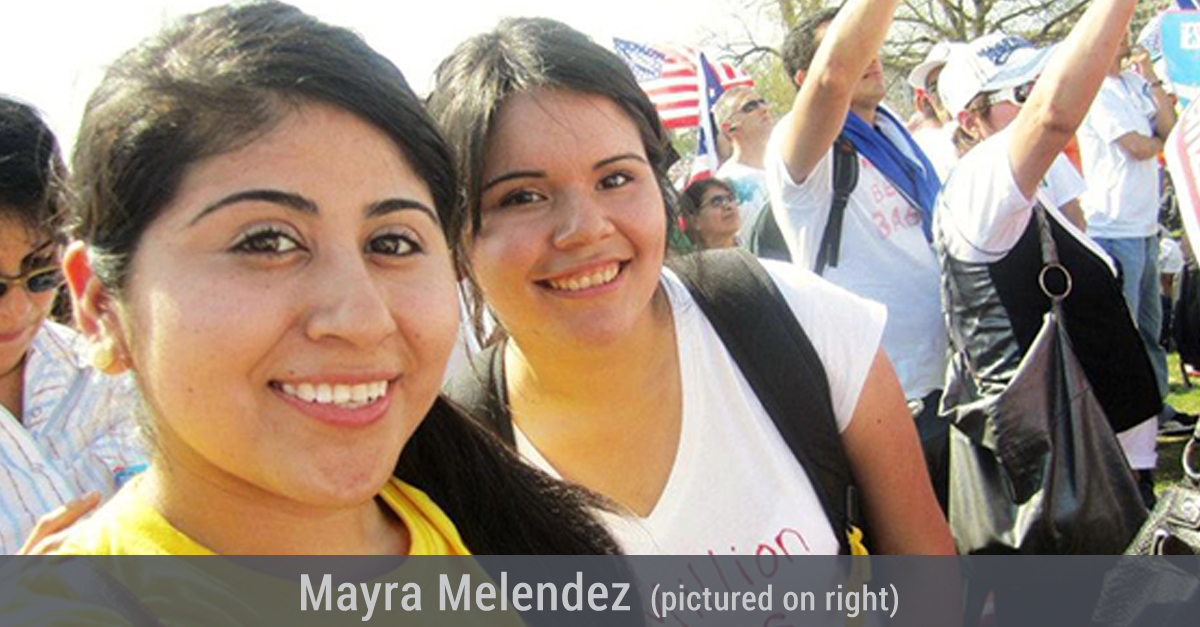 Mayra Melendez was seven years old when she moved with her family to Salisbury, Maryland from Lima, Peru in 2001. “My dad came here with an H1B visa, through an employer,” Melendez recalled. “He applied for a green card along the way, but when I was 16 or 17, he found out the green card application had been rejected because one of the lawyers had misunderstood his application… He was rejected because of an error.” Melendez’s family stayed on to continue their lives here, but the fear and uncertainty of living in the US without authorization hung over the family. She finished high school and began attending nearby Salisbury University.

During her sophomore year in college, the Maryland Dream Act was to come up for a statewide vote, a bill that would give in-state tuition rates to undocumented Maryland residents. Just months before, the Obama Administration had passed DACA,  Deferred Action for Childhood Arrivals, the US immigration policy that allows certain undocumented immigrants who entered the country during childhood to be exempt from deportation.  Melendez and a team of university students campaigned for the bill, which eventually passed by a large margin.

“There was a lot of media coverage, but not enough about who it was actually affecting,” Melendez noted, on immigration reform in her state and countrywide. “Our goal was to put a human face to the issue.” Around that time, Melendez heard about Migrant Clinicians Network. “There are a lot of farmworkers in our region and I realized that I hadn’t got a chance to work with that population. I had mostly worked with students.” She applied for an MCN internship with MCN's Environmental and Occupational Health office in Salisbury during her Junior year to “expand my knowledge of immigration and learn about a population that was right here in my backyard.”

After the internship, MCN hired Melendez to conduct outreach to area immigrants to engage them in our Maryland Humanities-funded project entitled, “Work. Respect. Dignity.” Her yearlong involvement with MCN culminated in last year’s photo exhibit and panel discussion, which showcased the lives and work of immigrants on the Eastern Shore of Maryland.

“Mayra played a critical role in the success of our photo exhibit and panel discussion. We had an incredible turnout from the Latino community in Salisbury, which was largely due to Mayra’s outreach and hard work,” says Kerry Brennan, MCN’s Environmental and Occupational Health Program Manager.

Melendez didn’t slow down in her final year of college. “I decided I wanted to install an undocumented student program,” following what some universities in California and Texas had done, to provide students with more resources and tools and to “raise awareness that there are undocumented students on campus. It had been two years since DACA, and many people didn’t know what it was,” she said. She arranged on-campus awareness campaigns and events, which featured the stories of students and how policy affects real lives. That project is nearing completion; Melendez hopes a new page with resources for students will be up on the university’s website shortly.

“MCN has a strong commitment to working with undergraduate and graduate students in order to give them an opportunity to learn about migrant health and justice.  Mayra exemplifies the students we strive to foster at MCN,” says Amy Liebman, MCN’s Director of Environmental and Occupational Health.  Melendez graduated in May of this year.

After graduation, Melendez completed a FirstGen Fellowship at the National Immigration Law Center in Washington, DC. MCN staff was thrilled to find that her MCN internship helped Melendez in unexpected ways; Melendez reconnected with photographer Earl Dotter, with whom she worked closely during the photo exhibit. Dotter hosted Melendez in his home outside of Washington, DC while she completed her internship!

Melendez is now in the first year of a competitive two-year fellowship with the Immigrant Justice Corps in New York, where she is helping immigrants seeking legal status and fending off deportation to navigate the legal system  -- the type of help her father needed so many years ago. “I provide assistance on applications, green cards, status, all the light touch cases,” she said, although with further training and accreditation she will be doing more in-depth assistance soon. She is preparing to take the LSAT -- “I want to go to law school after the fellowship is over,” she said. Good luck to Mayra and thank you for your hard work at MCN!