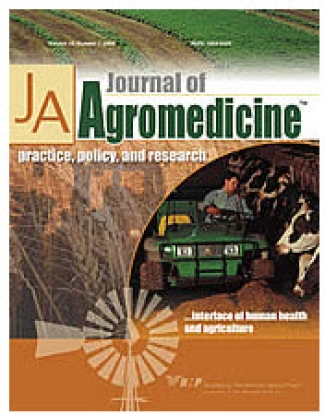 In its current issue, the Journal of Agromedicine celebrated the work of Kevin Keaney, chief of US Environmental Protection Agency’s Certification and Worker Protection Branch. Keaney is a driving force for worker protections against pesticides, as is evident in his long history of successes at the EPA, including the momentous announcement of revisions to the EPA’s Worker Protection Standard (WPS), which were released in 2015. For his work on the revisions, the Journal of Agromedicine named him “Leader in the Field” for 2016.

“Kevin has spent more than 30 years inside EPA and is deeply committed to the agency’s mission of protecting human health and the environment,” says Amy K. Liebman, MPA, MA, Migrant Clinicians Network’s Director of Environmental and Occupational Health. “His leadership in the revised Worker Protection Standard exemplifies his commitment as this important standard has the potential to improve the health and safety of farmworkers.”

The Journal of Agromedicine article follows the history of the WPS, from its establishment in 1992 to the release of last year’s revisions, which included the new minimum age of 18 for pesticide application and for early entry into restricted areas, and training every year instead of every five years.

Director the National Farm Medicine Center and Journal of Agromedicine Editor-in-Chief, Matt Keifer, MD, MPH has known Kevin for more than a decade and notes in the article that Kevin “is the strong silent type. Like Sisyphus pushing the boulder up the hill, Kevin quietly but powerfully pushes his institution to fulfill its mandate of protecting agricultural workers from the deleterious health effects of pesticides.”

Read the full article, entitled “Journal of Agromedicine ‘Leader in the Field’ 2016: Kevin Keaney,” offered as an open-access article for this month only. Congratulations to Kevin Keaney!