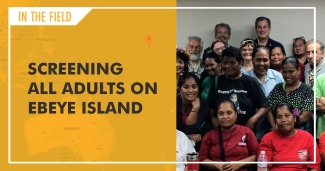 For the last three weeks, MCN has been missing two key players in our all-star lineup of clinicians and health justice advocates: Ed Zuroweste, MD and Candace Kugel, CRNP, CNM, who spent three weeks on the tiny 80-acre island of Ebeye, population 11,000. The island is one of the Marshall Islands, a republic in “free association” with the US, meaning the US provides some governmental resources like defense and health services. The clinician duo were part of a ten-person US-based team for a CDC/WHO-funded project to screen all 6,000 adults on the island for tuberculosis, leprosy, hypertension, diabetes, and hyperlipidemia. This group was assisted by over 30 local community health outreach workers (CHOWs), nurses, doctors, radiology techs, and support staff.

“Out of the 2,000 people we screened during our three-week stint on the island, roughly 800 had an abnormal screening result,” Dr. Zuroweste noted. After an abnormal result, the patient was sent to Dr. Zuroweste, who diagnosed and referred the patients on to the appropriate clinic (diabetes or cardiovascular) at the local HRSA-funded Federally Qualified Health Center, before a chest X-ray for TB screening. Of the 800 abnormal screenings, 8.4 percent were newly diagnosed diabetics (overall 23.5 percent of individuals had DM) and 8.04 percent were newly diagnosed hypertensives (overall 26.2 percent of individuals had HTN), he said. Those who did not have an abnormal screening result bypassed the additional exam and went straight to the chest X-ray. Kugel, along with a physician from the San Francisco City and County Tuberculosis Control Section of the San Francisco Department of Public Health, assisted all the women in their chest X-rays. Kugel provided a full skin check for leprosy and prepared them for the X-ray. The physician read the X-ray for TB.

“Anyone with an abnormal chest X-ray would do a sputum and a GeneXpert MTB/RIF, a two-hour diagnostic test for TB drug resistance,” Dr. Zuroweste explained. Through the screening, the team has so far identified more than 32 new active TB cases, including several children found through contact investigations related to newly discovered active adult cases.

Dr. Zuroweste noted that the 32 new active cases among 3,969 total screened thus far demonstrates why the new project was needed. This rate of 806/100,000 is remarkable high and one of the highest TB rates in the world.

The project is taking place at the island’s hospital and Federally Qualified Health Center, which will continue to follow up with those who were newly diagnosed. The project will wrap up at the end of next week, after nine weeks of screenings.