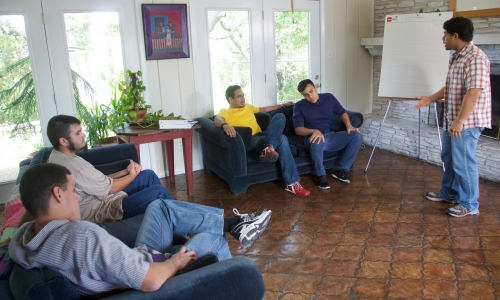 In 2011, MCN received support from the Department of Justice Office on Violence Against Women for an initiative aimed at engaging Latino migrant men as allies with women to end sexual and intimate partner violence (s/ipv).  With this support, MCN was able to partner with two organizations to implement MCN's Hombres Unidos Contra la Violencia Familiar workshop to begin organized discussions with men on the primary prevention of s/ipv.

What resulted from these discussions with Latino migrant men were a set of messages the men developed because they felt they needed to be communicated to their peers who hadn't participated in these workshops.

In 2013, MCN held three focus groups in which men who had no previous violence prevention education discussed the messages that the Hombres Unidos participants developed.  These focus group participants validated these messages and also identified that the most effective way for them to receive the developed messages was to be able to see the messages visually and then have corresponding discussions on what they saw.

MCN developed 3 vignettes that portray the three messages developed in video and printed form.  Accompanying discussion guides were created to be used by male peers, community leaders, or outreach workers for one-on-one and small group discussions with men.  These resources are now available for men to begin having these conversations with other men on preventing sexual and intimate partner violence in their communities. 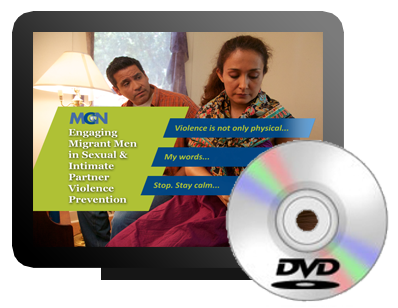 *It is important to review and use the Discussion Guide Informational Packet before using the resources with your community. 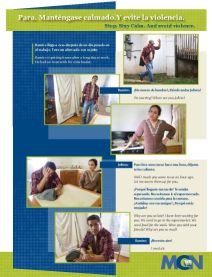 Stop. Stay calm. And eliminate violence. // Para Manténgase calmado. Y evite la violencia.
This story leads men through a scene in which a husband reacts positively to a situation that could have ended otherwise, demonstrating act non-violently.

My words cant hurt my partner // Mis palabras pueden causar daño a mi pareja.
This story leads men through a series of small scenes in which a wife experiences verbal abuse from her husband.

Violence is not only physical. It is emotional, sexual and economic. // La violencia no es solo física. Es emocional, sexual y económica.
This story leads men through a series of scenes in which a husband and wife demonstrate violent behaviors that aren't physical.