Oral Health Disparities continue to be a major challenge facing the United States. Newacheck et al. (Access to health care for children with special health care needs. Pediatrics, 105, 760–766, 2000) reported that dental care was the most prevalent unmet need among US children and near-poor and poor children were 3 times more likely to have an unmet need as non-poor children. Uninsured children were also 3 times more likely to have an unmet need as privately insured children. Among older adults, dental health problems are cumulative and just as prevalent as in childhood. According to the Surgeon General’s Oral Health in America report, oral diseases in older adults have greatest impact on those who are economically disadvantaged, lack dental health insurance, and are members of racial and ethnic minorities. Having a disability, being in an institution, or not being able to leave the house also increase the risk of poor oral health. These and individuals in families living below the poverty level experience more oral diseases and tooth decay than those who are economically better off. Furthermore, oral diseases seen in these individuals are more likely to be untreated than in those living above the poverty level. 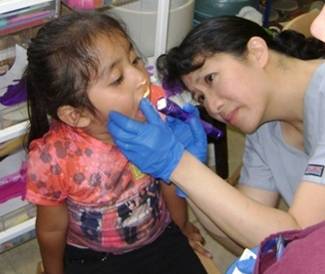 Dental Caries is one of the main diseases in oral health. It is an infectious, transmissible disease that is ubiquitous in all populations and is of epidemic proportion. Dental caries is the leading chronic disease of childhood. Among 5-17-year-olds, dental caries is 5 times more common than a reported history of asthma and 7 times more common than hay fever (2000 Surgeon General’s Report: Oral Health in America). Furthermore, it is one of the most commonly overlooked and untreated illness (Newacheck et al., 2000). Prevalence of caries increases with age. NHANES III data indicate nearly 20% of children age 2 to 5 have at least one primary tooth with untreated decay. The 2000 Surgeon General’s Report on oral health reported that the majority (51.6%) of children aged 5 to 9 years had at least one carious lesion or filling. This proportion increased to 77.9% for 17-year-olds and 84.7% for adults 18 or older.

There are great disparities in tooth decay by race/ethnicity and poverty level especially among children. Baseline data for the Healthy People 2010 document reported that, for children aged 2 to 4 years, 24% of non-Hispanic blacks had dental caries in their primary teeth compared to 15% for their non-Hispanic white counterparts. Weinstein et al. (1992, Mexican-American parents with children at risk for baby bottle tooth decay: pilot study at a igrant farm workers clinic. Journal of Dentistry for hildren, September-October: 376-382.) reported 30% of 125 Mexican-American children ages 8-47 months had caries.

Restoration of dentition impacted by caries is costly, time consuming for both the clinician and the patient and often requires several treatment visits. Children frequently need general anesthesia, with all its potential complications, because the level of cooperation of toddlers and preschoolers is less than ideal . The high levels of childhood caries in many areas of the US continue to lead to unnecessary, preventable pain, suffering, poor nutrition and growth, unnecessary loss of time from school, and huge expenditures for health systems.  The reduction of Oral Health Disparities is a primary objective in Healthy People 2010.

One of the best resources for information and tools for oral health managment in underserved populations is the National Network for Oral Health Access.