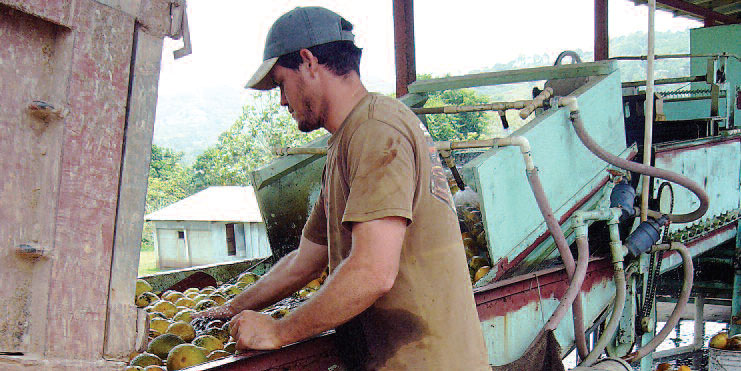 Since September, Migrant Clinicians Network and the Puerto Rico Primary Care Association have been hosting the Zika ECHO Clinic for front line clinicians treating patients with the Zika virus in Puerto Rico. Every month, the ECHO project brings together over 40 nurses, doctors, promotores de salud, and other health advocates to enhance communication, gain insight and current information from specialists focused on the virus, and share resources, case studies, and best practices.

The Zika ECHO Project has adopted the model of Project ECHO, an innovative learning and knowledge-sharing platform developed by the University of New Mexico. Through teleconferencing, telehealth technology, and clinical management tools, Project ECHO provides training, guidance, mentoring, and networking for clinicians in underserved areas, to help build specialty care capacity within the primary care model. For rural Puerto Rico, the Zika ECHO Clinic has enabled communities to quickly mobilize and respond to the Zika virus, a health crisis that has greatly affected the country’s large agricultural worker population. This has been one way health centers have responded to the serious and widespread emerging issue.

The Director of Nursing at Costa Salud Community Health Centers in Rincón, Puerto Rico, Tamara Soto, RN, MSN, has been an active participant in the Zika ECHO Clinic. The following interview outlines actions taken as the disease emerged and outlines the health center’s preparations for the future.

Tamara Soto: The geographical location favored us in the sense that the first cases had been diagnosed in the capital and in the eastern part of the Island. This allowed us to prepare ourselves and have a wider knowledge of what was happening. The health department had alerted us that cases were expected to increase and subsequently the Puerto Rico Primary Care Association offered training on strategies and unifying efforts to allow us to best deal with the number of cases seen.

After having trained the entire staff to raise awareness on the virus and how to address it, we trained the clinical staff. We emphasized very comprehensive education, since our efforts were directed at the entire population, from the simplest [patient cases] to the most complex. Zika education is of vital importance because the virus created a lot of disbelief, worry, and bewilderment. There was even doubt [of its existence] because we were talking about the same vector that causes Dengue and Chikungunya. This proved to be a point of great confusion for our population. When we talk about the Zika virus, we now recognize the importance of empowering our population. We formed an interdisciplinary team to create a culture of education for patients and families. It required significant teamwork among all departments, led by our excellent outreach team, with Yesmin Zapata as project coordinator.

We organized a work team with the goal to educate the communities, both the patients attending our clinic and the larger community. We made alliances with leaders of the neighborhoods and schools of the community and involved the local governmental agencies.

We started [seeing a big wave of] cases in the middle of July 2016 [which] extended into August and September. We quickly identified the region that was being affected. A partnership was established between government authorities and our outreach program to work with community leaders and inform the general population of measures to avoid the vector.

Dr. Ponce-Gonzalez: What happened after cases lessened in the fall?

Soto: During the months of October, November, and December, we saw an increase in the number of influenza cases. If the patient didn’t present with a rash -- a common symptom of Zika -- the primary suspect was influenza. At the same time, the latest research estimated that four out of five patients who visited us in the emergency room were Zika positive and asymptomatic. We set ourselves with the task of re-training the clinical staff with that in mind. Continuous monitoring is therefore of vital importance in this process. The greatest number of Zika cases we experienced were during the month of October 2016.

Dr. Ponce-Gonzalez: What does Zika look like now at your health center, six months after the peak of cases?

Soto: For the month of February, the most recent month for which I have data, we recorded 159 new cases, both adult and pediatric. Two were prenatal patients. One infant was diagnosed with microcephaly.

Dr. Ponce-Gonzalez: When did Costa Salud begin participating in the Zika ECHO Clinic? Has this project benefited the health center?

Soto: In October, we received an email inviting us to participate in the November 18 video conference call, where our center would be actively integrated into the efforts of the Zika ECHO Clinic, and would give us a chance to share our work with other centers. The Zika ECHO Clinic has provided us with the tools to keep us informed and educated with excellent resources that have provided valuable information through webinars and have updated us on changes in protocols around Zika, in addition to giving our pediatricians the opportunity to participate in the presentation of cases in a forum open to other professionals.

Dr. Ponce-Gonzalez: What is the plan of the health center for the next year in terms of Zika or other emerging issues?

Soto: We hope to continue to work as a team, educate the community including… making alliances with the government authorities of Rincón, and re-train staff to raise awareness.

Soto: We integrate all of our resources, like providing educational information to clinical staff in the electronic record as a reminder tool, and gathering data. Until [we developed popular outreach materials for all ages], tools were used for children like coloring books, and comics and fun clothing for young adults, to stimulate curiosity in the population. Simultaneously, our outreach team visited all the schools and communities in Rincon and Aguada providing information to the public and delivering prophylactics and Zika kits for pregnant women. Visual and interactive tools were also implemented, such as videos, presentations, and talks for all ages. Many of our activities were coordinated with the local universities that integrated interactive education on Zika for our pediatric patients. Collaborative agreements were also worked out with community groups and municipal agencies. 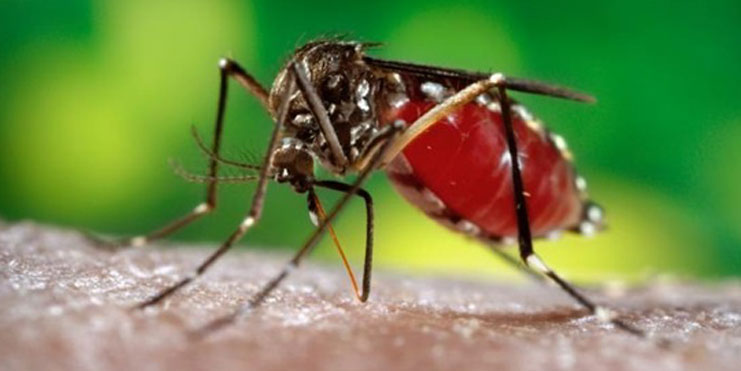 In April, the Centers for Disease Control and Prevention (CDC) released an updated report that provided new data analysis for US cases of Zika among pregnant women and the effects on their babies. In total, 250 pregnant women had confirmed Zika infection in the US in 2016, and 24 of those cases – roughly 10 percent – had a baby with Zika-related birth defects. Last year, 44 states reported Zika infections among pregnant women; most were travel-related. Read the complete VitalSigns report at https://www.cdc.gov/vitalsigns/zika-babies/index.html.

Clinicians should continue to screen pregnant women for exposure to Zika, and educate families about Zika and prevention strategies, including mosquito bite prevention, avoidance of travel to infected areas, and condom use. This is particularly relevant for clinicians serving mobile populations who may have recently traveled to or may be soon traveling to areas where Zika is locally transmitted. Read more at MCN’s Zika page: http://www.migrantclinician.org/issues/zika. 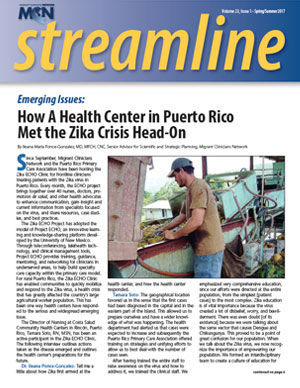 Read this article in the Spring/Summer 2017 issue of Streamline here!

Return to the Streamline Spring/Summer 2017 Table of Contents.