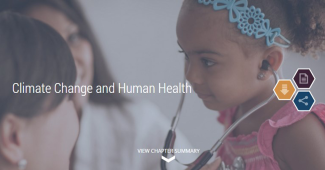 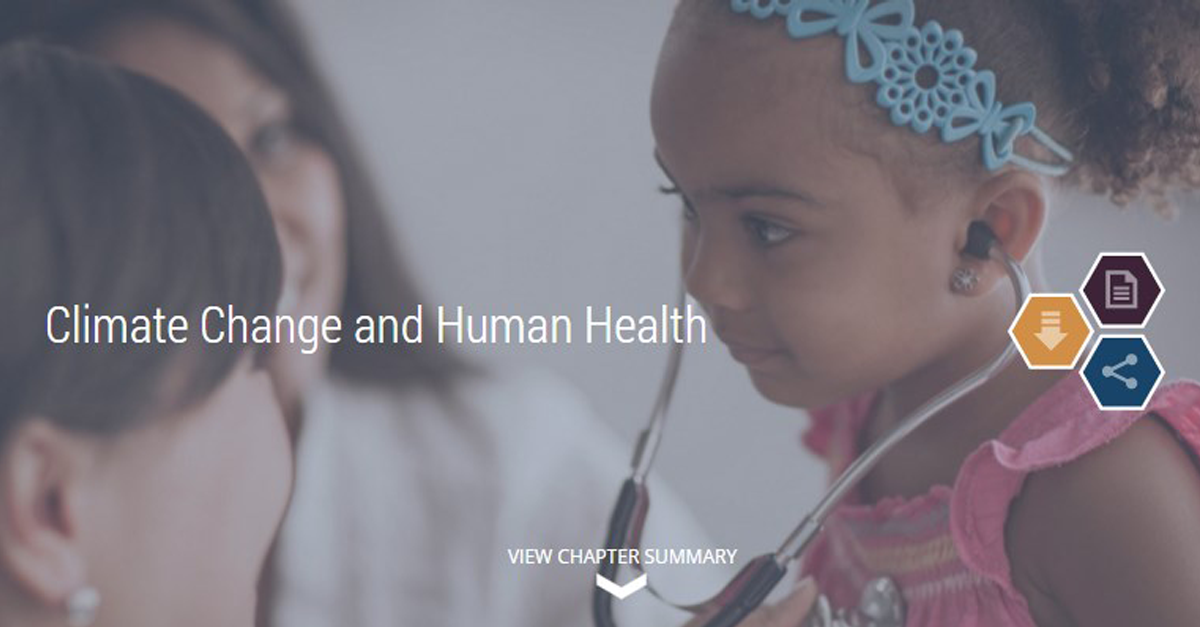 [Editor’s note: This week is National Public Health Week. Climate change has long been recognized as a significant and emerging global public health threat. The Lancet’s 2009 Commission on Climate Change called it the “biggest global health threat of the 21st century;” the Lancet’s 2015 Commission on Health and Climate Change added, “Tackling climate change could be the greatest global health opportunity of the 21st century.” Here, we dive into the newest report examining the substantial effect climate change has on public health here in the US.]

This week, the US Global Change Research Program (USGCRP) published its long-awaited report, The Impacts of Climate Change on Human Health in the United States: A Scientific Assessment. Released at the White House on Monday, the report takes a comprehensive look on how climate change is already influencing our health, and how it will affect health among various populations as climate change worsens.

“By the end of the century, we are looking at an increase of tens of thousands of illnesses and death episodes because of climate change,” Surgeon General Vivek Murthy warned at the press conference celebrating the report’s release. The extensive assessment examines how changes in frequency, severity, duration, and location of weather and climate phenomena influence human health. The chapters explore the top concerns in-depth: increased heat stress; air quality impacts; extreme weather events; vector-borne illnesses; water-related illnesses; food safety, nutrition, and distribution; and mental health and well-being.

“As clinicians who care for agricultural workers, we recognize that climate change will most assuredly worsen the already difficult task of harvesting the nation’s food, with increased risk of heat stress and exposure to more insect vector illnesses like Dengue, Chikungunya, and Zika,” said Migrant Clinicians Network’s Ed Zuroweste, MD, Chief Medical Officer, in response to the report. “Other workers we serve will similarly be strongly affected by climate change, due to their poverty, language and cultural barriers, and, for many, the outdoor occupations they can secure.”

“Climate change is already causing, and is expected to continue to cause, a range of health impacts that vary across different population groups in the United States. The vulnerability of any given group is a function of its sensitivity to climate change related health risks, its exposure to those risks, and its capacity for responding to or coping with climate variability and change.”

Populations of special concern include immigrants (including those with low English proficiency) lower-income populations, some communities of color, Indigenous peoples, children and pregnant women, older adults, vulnerable occupational groups, persons with disabilities, and persons with preexisting or chronic medical conditions.
Social determinants of health influence a person’s vulnerability to climate change, the report continues. Populations of concern are exposed to “multiple, complex stressors” that are expected to become more prevalent “as climate impacts interact with stressors associated with existing mental and physical health conditions and with other socioeconomic and demographic factors.”   The report calls out migrant laborers and day laborers as examples of populations more heavily affected by climate change; for them, “the health effects of climate change can be cumulative, with occupational exposures exacerbated by exposures associated with poorly insulated housing and lack of air conditioning.”

“Climate change intensifies many health issues that migrant populations already face, whether en route or at their workplace,” explained Amy K. Liebman, Migrant Clinicians Network’s Director of Environmental and Occupational Health. “Addressing climate change at a national and international level is important for the health and well-being of migrants.”

About the report: The USGCRP report was developed by roughly 100 scientists from eight government agencies, including the Environmental Protection Agency, the National Oceanic and Atmospheric Administration (NOAA) and the Department of Health and Human Services. The USGCRP is a Presidential Initiative established in 1989 to “assist the Nation and the world to understand, assess, predict, and respond to human-induced and natural processes of global change.”