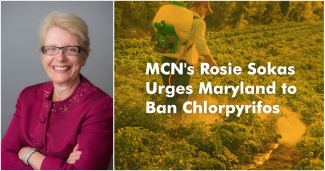 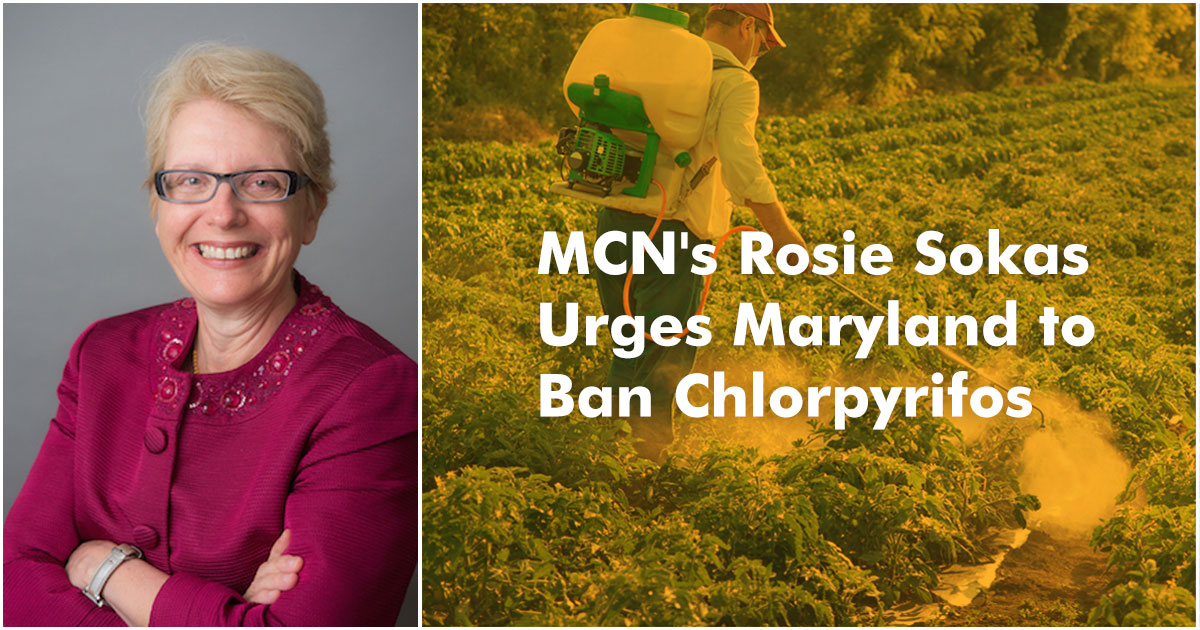 “Please consider the impact of this chemical on the health of Marylanders, particularly those who are most vulnerable and most exposed.” - Rosemary Sokas, MD, MOH

Last year, the US Environmental Protection Agency was set to ban the pesticide chlorpyrifos after years of study showed that exposure to the organophosphate insecticide contributes to a wide range of health complications, particularly in children exposed in the womb, who demonstrate reduced birth weight, reduced IQ, and delayed mental and motor development. Unfortunately, EPA reversed its decision. Now, states are stepping in to act on EPA’s own scientists’ recommendations, looking to ban chlorpyrifos to protect farmworkers, rural community members, and environmental health.

Yesterday, MCN’s board member Rosemary Sokas, MD, MOH headed to Annapolis, Maryland, to provide expert testimony on the health risks posed by continued use of chlorpyrifos in farmlands, in support of Maryland’s HB 116 which seeks to ban the dangerous chemical.

Almost two decades ago, the US EPA banned the use of chlorpyrifos in residential settings based on research demonstrating permanent neurodevelopmental effects resulted from very low doses of chlorpyrifos exposure in utero or during childhood. “But the agency allowed continued use of the pesticide in agriculture, resulting in exposure to the children of farmworkers and other rural residents,” Dr. Sokas said. “This double standard has exposed a generations of farmworkers and their children through airborne drift, water contamination, and even the residues on work clothes.”

Dr. Sokas emphasized the danger for pregnant women living and working in rural areas: “It is not possible to reduce the level of exposure below the threshold for damaging the fetus,” Dr. Sokas noted. Even water provided to workers to prevent heat illness may be contaminated at low levels that could cause harm. In its most recent Human Health Risk Assessment for chlorpyrifos, EPA found that there are no safe levels of the pesticide in food or water, that unsafe exposures to farmworkers continues to occur on average 18 days after applications (despite worker re-entry times no longer than 5 days) and that workers who mix and apply chlorpyrifos are exposed to unsafe levels even when using protective gear and engineering controls, Dr. Sokas continued. 1

EPA was ordered by a court on two separate occasions to take action on the chemical, as a result of environmental groups’ petitions to EPA to revoke its tolerance of chlorpyrifos residues on food. Since EPA declined to ban chlorpyrifos in March 2017, six attorneys general -- from New York, Maryland, Vermont, Washington, Massachusetts and the District of Columbia -- have sued EPA. Meanwhile, the California Department of Pesticide Regulation and the Office of Environmental Health Hazard Assessment have released their updated draft risk assessment for public comment, as they move toward a possible ban in California. Chlorpyrifos is widely used in agriculture despite the rigorous research demonstrating its dangers. (MCN has written about last year’s large chlorpyrifos exposures in Bakersfield and Monterey; but individual exposures are common.)

You can learn more about Maryland’s bill to ban chlorpyrifos and get involved at Maryland Pesticide Network or read their one-pager on the bill. Pesticide Action Network North American provides coverage of individual states’ efforts on chlorpyrifos (www.panna.org) and Farmworker Justice, our partner in bringing Dr. Sokas to Maryland, covers efforts to improve farmworkers’ living and working conditions, immigration status, health, occupational safety, and access to justice (www.farmworkerjustice.org).