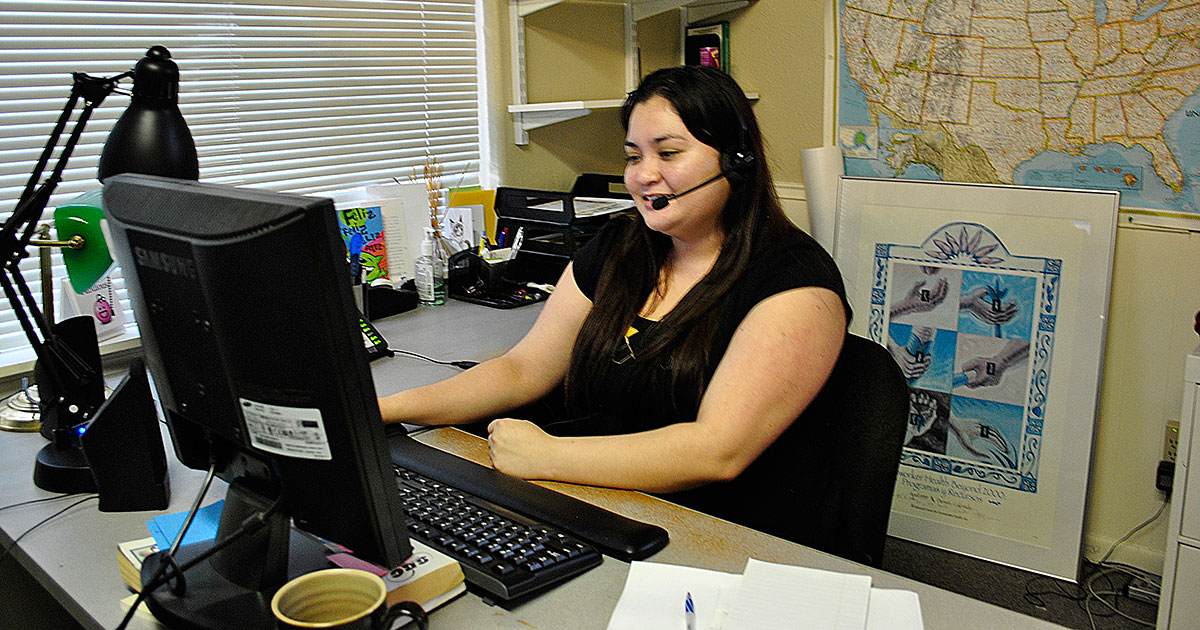 “I call with an interpreter,” she explained, since she is not bilingual in Vietnamese. She has to wait for the family member to pick up the line, after which she connects with the interpreter to tell her in English that the line has been picked up. “But, when family members hear English, they often hang up!”

Health Network Associates employ a great variety of communication tactics to increase the likelihood of regular contact with patients or their family throughout their enrollment. The “anchor contact,” combined with the recent inclusion of communication technology like Skype, text, and WhatsApp, have been implemented to reduce the communication breakdowns that result from wrong or out-of service numbers, poor connections with far-off rural locales, or wary call recipients.

For several months every winter, 66-year old Phuong* visits family and friends in her homeland of Vietnam. This year, however, Phuong, a US citizen, tested positive to tuberculosis in her lungs and spine, requiring a 12-month treatment regimen. After eight months of treatment, she was ready to travel, so her local health department signed her up with Health Network to assure that she could continue treatment despite her travel plans.

Four days before her planned departure, Hayes received her enrollment form. She got ahold of Phuong one day before she left. “She said she had refills for all of her medications,” Hayes noted, “and I found a local health center’s information the day that the patient departed.” Later that week, Hayes followed up with the doctor’s office in Vietnam but found the number out of service, so she called the patient’s friend, who is listed on the enrollment forms as a contact in the US. The friend got Hayes the doctor’s email address.

Several of Health Network’s communication tactics lined up to assure that Hayes was able to keep contact with Phuong despite her rural location. First, Hayes made sure that Phuong provided detailed contact information for her anchor contact — a person in Phuong’s life who is not traveling, who can be relied upon to pick up the phone if all other contacts fail. This might not necessarily be the emergency contact like a mother or a sister; it might be a friend or a mother’s neighbor. Secondly, Hayes didn’t just stick to calling contacts. As with many patients, Hayes found that other technologies are easier to access from abroad and increase the likelihood of ongoing communication.

“Patients with family and friends in other countries are rapidly employing a variety of communication platforms to stay connected to the folks back home,” noted Deliana Garcia, MCN’s Director of International Projects, Research, and Development. The various platforms don’t just improve communication between Health Network Associates and patients; they can serve as a reminder for patients. “[Patients] prefer in some cases to have a written record of the information they are given so that they do not have to recall it from memory or look for a pen and paper while on a phone call,” Garcia added.

Through email, Hayes received regular updates from her anchor contact — the friend in the US. Two weeks before the patient’s scheduled return, Hayes emailed the doctor again to get updated records before the patient returned. “Five days later, I got a great document. It’s difficult to get complete records from Vietnam. The doctor had made a chart of the medications she was taking and how often she was taking them, and the days that the doctor did a check-up. There were no lab reports, but she did check blood pressure and pulse during regular check-ups,” the records noted. The doctor also reported that the patient followed treatment, followed health instructions, ate and slept well during treatment, and gained weight during her time in Vietnam.

In late spring, the patient returned to the US. Hayes spoke to her two weeks later to make sure she had a scheduled appointment for a check-up and X-ray. She followed up with her once a month to ensure the continuation of treatment, until late June, when she completed treatment, at which time Hayes closed the case.

The case is a typical one in that Health Network Associates must often try many different contacts and various modes of communication before making contact with the needed health authorities and patients, a patient advocate who the patient has indicated can speak on his or her behalf, or an anchor contact. The depth of reporting from the doctor abroad, however, was unusual, as Health Network Associates often spend more time working with the patient’s health clinic abroad to develop health records that are acceptable to US health departments. The most important aspect of this case, as with all of our cases, was the outcome: through Health Network, Phuong was able to continue her treatment, despite travel to a rural corner of Vietnam for several months, followed by a return to the US.

Learn more about Health Network, watch a short video on the benefits, download enrollment forms in four languages, and schedule a training to get started: http://www.migrantclinician.org/services/network.html.

* All names, dates, and locations have been altered to protect the patient’s identity.

The material presented in this portion of Streamline (pages 1 - 5) is supported by the Health Resources and Services Administration (HRSA) of the U.S. Department of Health and Human Services (HHS) under cooperative agreement number U30CS09742, Technical Assistance to Community and Migrant Health Centers and Homeless for $1,094,709.00 with 0% of the total NCA project financed with non-federal sources. This information or content and conclusions are those of the author and should not be construed as the official position or policy of, nor should any endorsements be inferred by HRSA, HHS or the U.S. Government. 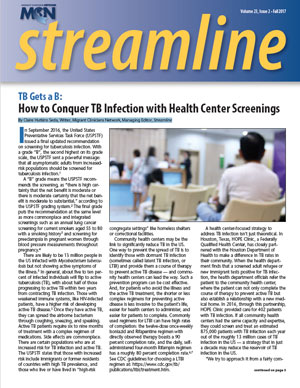 Read this article in the Fall 2017 issue of Streamline here!