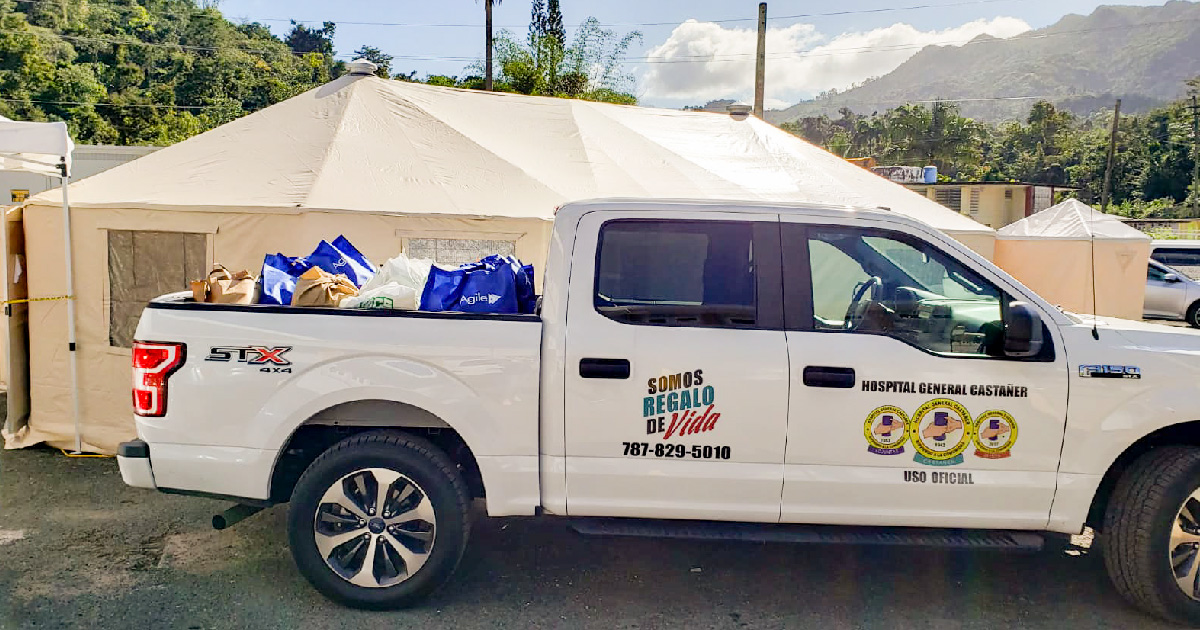 [Editor’s Note: This is the third update from Marysel Pagán Santana, DrPH, MS, MCN’s Puerto Rico Program Manager in San Juan, as small quakes continue to rattle nerves and damage buildings in Puerto Rico everyday for the last month. For more on the basics of the earthquakes and MCN’s work thus far, read our first two installments, “Managing Care During Emergencies: Resources for Before, During, and After an Earthquake,” and “Earthquakes in Puerto Rico: Learning From Communities and Supporting Their Work.” You can support communities directly by contributing on our Puerto Rico page.]

“Puerto Rico's poor suffer the most from natural disasters. Already vulnerable due to their poverty, and in need of resources, the earthquakes magnify their situation. This combined with the inadequate allocation of public resources and management elevates their experience and diminishes their health even more,” explained Dr. Pagán Santana. “Those of us who work towards eliminating social disparity use this as an opportunity to direct resources to those communities.”

About a week ago, Dr. Pagán Santana, staff from Hospital General Castañer, and Nancy Cardona, DrPH, MS, from People-to-People for Puerto Rico (p2p4PUR) of the University of Rochester, delivered supplies to a rural mountainous community in central Puerto Rico that was suffering after the earthquakes but not enough to warrant federal disaster status. Dr. Pagán Santana has worked with this community through MCN’s “Mobilizing Communities in Puerto Rico to Meet the Needs of Vulnerable Populations Before, During, and After a Natural Disaster,” which launched projects in three Puerto Rican rural communities one year ago under a two-year grant from the Bristol-Myers Squibb Foundation. The program provides a framework for emergency response and community mobilization, which has allowed this community to jump into action after the earthquakes. Consequently, the coordinator from the project was able to get Dr. Pagán Santana an up-to-date list of needs for those who were sleeping in tents.

Dr. Pagán Santana had reached out to a group of fellow health professionals and other supporting colleagues to ask for those needed supplies, which flooded the MCN Puerto Rico office. The group loaded a pickup truck and headed out to the field. About twenty minutes from Hospital General Castañer, the small community lies in an area in central Puerto Rico that isn’t considered an acutely affected area. The community, called Sector el 30 in the Maricao municipality, has families with babies and young children, and many elderly people. “They’re very isolated, they are low-income, and the age ranges we find them make them more at risk,” Dr. Pagán Santana said. 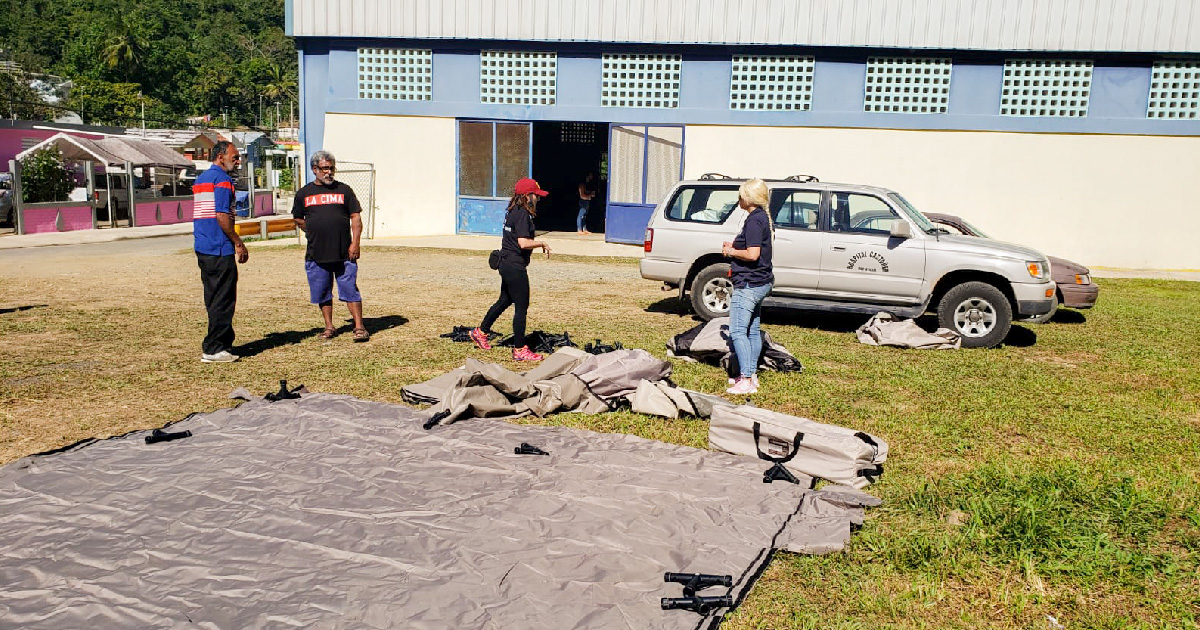 Dr. Pagán Santana met an elderly woman whose house was lost during the recent earthquakes. She was sheltering in a tent, one of several set up in the parking lot of an indoor basketball court. Around 50 people stayed there each night, but most spent the day elsewhere. Most people are choosing to sleep in tents instead of their houses for fear that another earthquake would take down their house -- or, in this mountainous region, take down a house above their house, or start a landslide, which would in turn tumble on their house. The fear is enough to keep people who still have houses from sleeping at home. Originally not an official shelter, enough people had congregated that the government marked the parking lot as a shelter and sent basic provisions and a coordinator.

When the group arrived with the pickup, those at the shelter had been at odds with a government-sponsored shelter coordinator, who argued that, based on the intact nature of the homes in the area, those at the camp didn’t need additional supplies as much as those in camps further south, whose homes had been damaged or destroyed. Such distinctions demonstrate the importance of community-organized disaster response, wherein neighbors care for other neighbors, instead of an external party determining who is worthy of assistance or not, says Dr. Pagán Santana. She and the team unloaded the supplies, handing out insect repellant, diapers, sanitary napkins, basic clothing, and other supplies to the grateful camp residents. They also set up a tent provided by P2P4PUR, which was originally used after Hurricane Maria in the community of Loiza. The Loiza community health center lent it to Hospital General Castañer, recognizing the need of this small community, demonstrating the support that health centers are giving each other and the importance of local and external networks, Dr. Pagán Santana noted.

Two days later, she joined Brigadas Salubristas, a broad group of volunteer clinicians and health professionals, at a large official disaster center in the south of the island to assist in the coordination of a medical brigade. The shelter was a tent city within a baseball stadium, Dr. Pagán Santana said, where around 200 people were registered at the shelter and another roughly 1,000 were sleeping nightly in surrounding parking lots. Over 100 volunteer health educators, social workers, psychologists, doctors, nurses, public health and other professionals broke out into smaller teams of five or six to provide basic and specialist care to local communities that were unable to reach the stadium. Dr. Pagán Santana, in a coordination role with her team, headed to a subsidized low-rent apartment complex that had been deemed unsafe. The area, while considered rural, was easier to access, with highways running through towns, than the central region she had visited the day before. The residents of the apartment complex had set up tents directly in front of their building. “The community needs more attention and resources, so [officials] want to move them to the stadium, where there is more help, but they’re not willing to move,” Dr. Pagán Santana explained. “If they go, they fear they’ll never be allowed back in if it’s compromised.” The health needs encountered there mirrored those at the stadium and the parking lot tent community: unaddressed hypertension and diabetes, chronic diseases, lack of basic health care, all layered with new anxiety and fear around the earthquakes.

“This is a manmade disaster,” Dr. Pagán Santana concluded. “The earthquake is adding anxiety -- they are stressed over their houses, and it adds pressure on the communities [to provide resources] -- but the health needs and the resource needs are not due to earthquakes, or a hurricane, or a lack of power. They were already there.”

Migrant Clinicians Network extends it gratitude to the following companies and organizations that generously provided supplies that were delivered to communities in need. Thank you to:

MCN is continuing to collect supplies for Puerto Rican communities.
Visit our Puerto Rico page for more information or to donate.